Browse the article Where Did Krampus Come From? 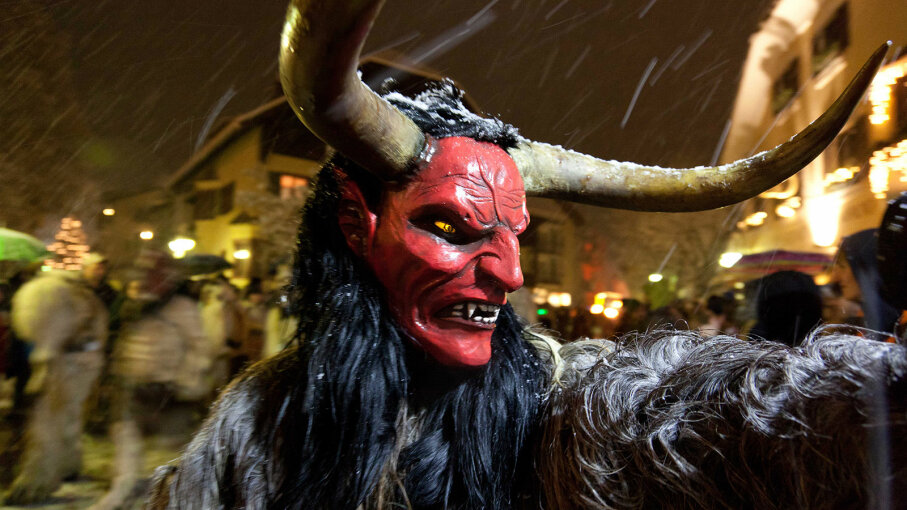 As the holidays close in, parents inevitably remind unruly children that Santa Claus is watching them. But there's another lurker out there in the long dark night, and he's watching too — a thing of fur and horns and cloven hoof.

Yes, Virginia, there is a Krampus, and for naughty kids, this demonic beast-man brings chains and switches instead of toys. Every Dec. 5 — the Krampusnacht Eve of the Feast of St. Nicholas — he descends from the mountain wilds to terrorize children and drag the worst of their lot away in a foul wicker basket.

While he's not the only yuletide bogeyman in Western tradition, Krampus has clawed his way to the front of that frightening pack. Unlike Iceland's Grýla the Ogress or France's Père Fouettard, Krampus has not only survived within his native Germanic Alpine traditions, but he's also managed to achieve international notoriety.

Before we explore the history, psychology or even anatomy of Krampus, you're probably wondering why yuletide bogeymen even exist. Surely, the holidays are a time of light and childlike wonder — not monstrous kidnappers!

Ah, but the holidays, at least in northern latitudes, have always been a time of darkness. Sure, we light trees, sing carols and feast upon the spoils of hunt and harvest, but the wintertime future is uncertain. Will spring thaw our frozen world? Will our crops grow again? Will our larder be enough to make it through the winter?

That's one reason why, if you venture through world mythology, you'll pass countless devils, satyrs and horned spirits who all resemble old Krampus. In Greek mythology, for instance, you'll find Hades' abduction of Persephone, the daughter of harvest goddess Demeter. It's a tense piece of drama that explains the Earth's seasons: winter arrives when Persephone must enter captivity in Hades, spring returns when she emerges again each year. The tale serves as an iconic reminder that winter is an inherently apocalyptic time, pitting the forces of order and life against darkness and death.

These very motifs permeate many early religions, and when Christianity spread through Europe, these old gods and spirits never quite died out. Rather, people wove them into the new religious tapestry. In fact, early Christians transplanted the birth of their savior Jesus Christ to Dec. 25, as this was a date associated with older celebrations of the new sun — that resurgent celestial force destined to defeat the long winter.

And so Krampus ties into a rich legacy of winter darkness, seasonal fear and pre-Christian traditions involving harvest spirits and wild men. On the next page, we'll get to know the old chap. 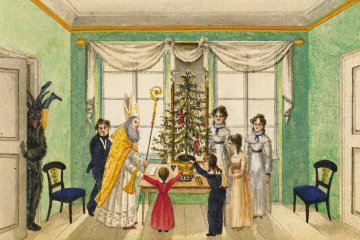 Krampus shows up for an 1820 Viennese Christmas party, as commemorated in the Baumann family album.
Photo by Imagno/Getty Images

Krampus' exact origins are just as uncharted as the uncivilized wilds from which he emerges every Dec. 5.

Saint Nicholas, that solemn Catholic precursor to jolly old Santa Claus, first gained popularity among German-speaking people during the 11th century. Krampus became part of the festivities over the centuries to follow, but he undoubtedly dated back to pre-Christian customs surrounding the pagan goddess Perchta and her consort of frightening and unruly Schiachperchten.

These customs never vanished, and eventually rebounded. By the 16th century, pagan Schiachperchten processions became a frequent part of winter festivities in Salzburg, Austria, despite centuries of Christian traditions. Catholic attempts to ban these festivals in the 17th and 18th centuries proved futile, so a demonic he-goat earned his tenure in Alpine holiday traditions.

In Alpine celebrations, Krampus and Saint Nick come to life through the use of costumes and wooden masks, but you can guess which role is more popular. Fur-clad goat-men tend to parade through the streets en masse every Krampusnacht. They rattle their chains, brandish torches and leap about with wild, indiscriminate energy.

As with many masked rituals and celebrations around the world, the rites of Krampusnacht are transformative. They allow participants to abandon the conventions of daily life and indulge a wilder and perhaps darker aspect of their personality [source: Honigmann]. As such, it's easy for things to get a little out of hand. Many processions number the costumed participants to keep everyone from crossing the thin line between good-natured holiday horror and emotional abuse.

Back in 2006, concerned parents and Austrian child psychologist Max Friedrich spoke out against the demon's violent influence, as well as so-called childhood "Krampus trauma." What made the situation particularly interesting was that while Santa was banned from visiting kindergartens in Vienna, Krampus apparently still had access to the kiddies [source: Zawadil]. In 2015, amid the massive influx of Syrian and Iraqi refugees into rural Austria, community representatives made special efforts to prepare newcomers — especially children — for their frighteningly fun holiday festivities [source: Eckardt].

In the past, Krampus detractors have even outlawed the demon outright. Before Nazi Germany's 1938 invasion of Austria, Catholic Austrofascists briefly held power and, as reported in a 1945 New York Times article, they saw Krampus as a demonic, unruly and potentially communist usurper of Christian tradition. Krampus postcards and candies have always been popular, but at the time Krampus had virtually usurped the role of prime gift giver. It was the demon, not the Saint Nick, who made the rounds with sweets and gifts.

The Austrofascists ordered anyone in a Krampus costume arrested on sight. They even required that all Saint Nicks be licensed by the state — and monitored.

Despite the continuing war on Krampus and any misgivings we might have about scaring good behavior into children with the threat of inhuman kidnapping, the tradition not only endures but flourishes. Internet culture and the rejection of homogenized holiday traditions have led to a full-blown, international Krampus revolution.

Will he usurp the Christmas throne once more? Just in case, let's dig a little deeper into how we might explain where his goatlike, prehensile-tongued physiology came from.

The Biology of Krampus 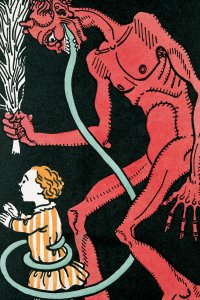 Krampus' tongue as witnessed in a 1911 Viennese greeting card.
Photo by Imagno/Getty Images

Yes, the bestial Krampus is purely folkloric, and details regarding his appearance and behavior are rather amorphous. His exact appearance varies depending on time, place and available costuming materials. In fact, the more you explore the nature of Krampus, the more you come to see him as a byproduct of accumulated beliefs, traditions and primal fears.

But what if he were real? What could we say about this bipedal, cloven-hoofed monster? And what about that lolling, serpentine tongue? Let's slip on our goat-fur cryptozoologist pants and dream a little.

We might assume Krampus is a meat eater, given his often-fanged appearance and penchant for child abduction. And if human children factor into his diet, then his tongue might serve as a means to procure them. In some early-20th century postcards, we observe this prehensile appendage wrapping its way around an unruly child. Nothing in our natural world quite matches this biological adaptation, however. Iguanas, frogs and woodpeckers all use elongated tongues to snatch their prey, but Krampus' large tongue would seem to enwrap and constrict significantly larger targets.

The closest match we find in nature is the 18-20 inch (45-50 centimeter) prehensile giraffe tongue, which it coils around shoots and leaves. This might seem to suggest Krampus feeds primarily on vegetation, as is certainly more befitting of the orders Bovidae (which includes cloven-hoofed goats) and Artiodactyla (which includes even-toed ungulate giraffes).

But perhaps Krampus is something else entirely: a hoofed carnivore descended from the extinct order Mesonychid, predatory land ungulates — or a relative of the long-extinct Artiodactyla Andrewsarchus, which some paleontologists interpret as a cloven-hoofed carnivore.

Perhaps the balance is a bipedal omnivore that feasts on abundant greens in the summer and cruelly-won meat in the winter — a notion that fits well into Krampus' legacy as a monster born of winter survivalism and post-harvest anxiety.

I gravitate towards Krampus for the same reason lots of other people do. As our Western, commercialized holiday season spirals out of control and countless advertisements project expectations of mandatory seasonal bliss, some of us pine for a dark savior — a symbol to balance out all that forced Christmas cheer with a little apocalyptic dread. Sure, the horned one grows a little more popular each year, carving an ever-larger pop-cultural niche. But, as this article explores, you can't quite nail old Krampus down. He's wild, uncultured, inherently antiestablishment and always injects some much needed madness into our holiday celebrations.