Why is it bad luck to wear opals if you weren't born in October? 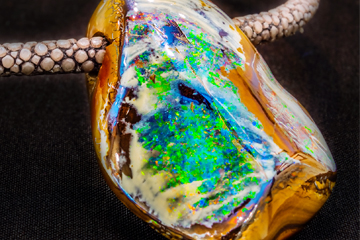 Opals have had a long history, but they continue to be one of the most interesting and precious stones out there.
Thomas Demarczyk/Thinkstock

Every month has a birthstone associated with it. If you were born in the month of October, your birthstone is the opal. Perhaps more than any stone, the opal is cloaked in mystery and legend. One of the better-known legends about the opal is that it's bad luck to wear one -- and even more so if it's not your birthstone. This superstition likely came about from a blend of the mystical power of the opal, stories of the opal in literature, and competition in the precious gem trade.

Centuries ago, the opal was thought to be good luck. The Romans believed it to be a symbol of hope, like the rainbow. The Greeks believed the opal gave its owner the gift of prophecy, and the Arabians thought the stone rained from heaven in flashes of lightning. In the Middle Ages, people believed the opal was essential to good eyesight, and young women wore them in their hair to ensure their hair color would never fade [source: Opals Down Under].

The opal may have been so widely revered because of the way the stone plays with color. Made up of microscopic spheres of silica with spaces between them, the opal refracts light in different ways. Because of this, opals appear in nature in all different colors [source: UNL].

Later in history, the opal's charms took a turn for the worse. It became associated with the Black Plague due to a rumor that a victim was wearing an opal that went dull after she died. It's more likely that the opal simply deteriorated, due to the unstable nature of the stone. In another story, a Spanish king gave an opal to his wife, and she soon died. He then gave the ring to his grandmother, who also died, and the tragedy continued with his sister and his sister-in-law. Finally, he put the ring on his own finger and died. In reality, the family probably died of cholera.

One of the worst blows to the opal's reputation came in the form of the 1829 novel "Anne of Geierstein" by Sir Walter Scott. The opal changed color with the heroine's moods. Then when her opal is touched by holy water, it discolors. She is accused of being a demon and dies shortly after. The public was so affected by this story that the opal market actually crashed and prices dropped by 50 percent [source: Pegg].

Another theory about why it's bad luck to wear opals if they're not your birthstone is a simple one; it was a rumor spread by diamond traders. When opals began gaining popularity in the 19th and 20th centuries, diamond merchants got nervous about losing business. The jealous traders started spreading rumors that opals were bad luck to prevent people from buying them.