by Rebecca Fairley Raney
Prev NEXT
7 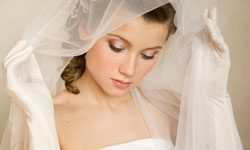 The wedding veil probably originated as a way to ward off evil and protect the purity of the bride.
iStockphoto/Thinkstock

The veiling of the bride has origins in the idea that she's vulnerable to enchantment, so she must be hidden from evil spirits. The Romans veiled brides in flame-colored veils to actually scare off those spirits.

Perhaps the most evil of spirits, in an arranged marriage, is the threat that the groom, who is perhaps seeing the bride for the first time, won't like what he sees. The veil saves everyone some embarrassment in the short term.

Also, in many religions, the veil is a sign of humility and respect before God during a religious ceremony.

The Victorians turned that reverence into a status symbol. During Victorian times, when archaic customs were formally incorporated into proper weddings, the weight, length and quality of the veil was a sign of the bride's status. Royal brides had the longest veils and the longest trains.

In modern times, generally we have some assurance that the groom has seen his bride and won't be disappointed, and that the only evil spirits will be the ones behind the bar at the reception. The tradition has become more of a finishing touch in wedding fashion. It's the icing on the cake, so to speak, that pulls together the hair and the dress.