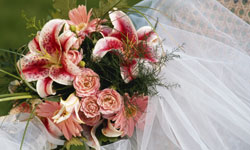 They're not just beautiful accessories: The wedding bouquet and veil both originated as ways for the bride to ward off evil.
David De Lossy/Photodisc/Thinkstock

In the shadow of the multibillion-dollar wedding machine, it can be hard to tell real tradition from a made-up sales pitch. Without question, the wedding industry has piled on the notion of paying to preserve tradition, when in fact, many of those high-priced traditions, such as the diamond engagement ring, don't go back much further than the 1920s.

Nonetheless, some traditions are real. And like anything in human history, many traditions have evolved from old ideas that we may see as a little strange today. For all of history, the joining of a bride and groom, and the establishment of a new household, has been viewed as such an important development that a great deal of superstition has cropped up around the event.

Many societies have viewed the bride, in particular, as existing in a vulnerable state, and in the interest of protection, she has been disguised, captured, adorned and even attacked by the guests to preserve good luck when going into a marriage.

Of course, that idea may not be so strange after all. There's a special sickening feeling that can afflict a bride on her wedding day. So maybe all those trappings -- the perfect dress, the beautiful location and the support of a good caterer -- protect her from her anxieties when the big day begins.