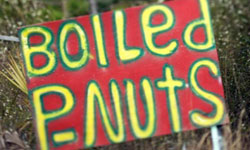 If you're a boiled peanut fan, you'll pull over when you see this sign.
Comstock/Thinkstock

Sure, the American South gave us some great people: Rosa Parks, Hellen Keller, Martin Luther King Jr., William Faulkner, Babe Ruth, Woody Guthrie. But let us not forget the other greats it gave us: boiled peanuts, cheese grits, sweet tea, fried chicken. Click ahead for the South's other culinary greats. But first, let's dig into where all these delicious treats came from.

We can trace the roots of Southern cuisine back to two things -- available resources and African influence. It makes sense that cuisine would be born out of a locale's most prolific crops. Foods like pecans, collards, turnips, sweet potatoes and peaches were readily available to Southern settlers. And plentiful rivers and lakes, plus the ocean, provided seemingly limitless amounts of crawfish, oysters, shrimp and catfish.

The African influence on Southern cuisine rose out of the slave trade. Slaves brought their own recipes and traditions with them, introducing foods like okra and black-eyed peas, and the method of frying food -- hence, Southern fried chicken. In Louisiana, French influence resulted in Creole and Cajun cooking.

The great thing about the South -- and about food -- is that it's always evolving. But some traditions die hard, and many of us carry them on year after year, often not even knowing why we do it. Let's take a look at some Southern food traditions and their possible origins.