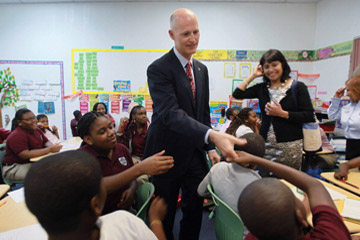 Charter schools provide a choice to parents and students who aren't satisfied with the educational opportunities of public schools, but aren't interested in or can't afford to attend a private school. A charter school is free to attend and usually funded with state education money.

While they're held to the same academic standards as public schools, proponents say charter schools are less encumbered by the bureaucracy of a public school system, giving them the freedom to explore different areas and methods of education. They can differ from public schools by focusing on particular subject areas (science and technology, or art and music), preparing students for a specific college major, using a distinct set of teaching methods, or wrapping the school's rules and activities around a theme such as military discipline.

On the other hand, critics contend that charter schools don't offer students a better education, aren't held as accountable to education standards, and drain funding away from public schools. It can be a contentious issue; multiple studies on the effectiveness of charter schools show contradictory conclusions.

Whether or not they're the better choice, charter schools do offer options to parents who feel dissatisfied with traditional public schools. They've grown increasingly popular in the U.S. and in other countries: Since the charter school movement began in the late 1980s, it has grown to include over 5,000 charter schools in the U.S. alone, serving 1.7 million students [source: Center for Education Reform]. This article will explain how charter schools are created and how their funding works. We'll take a look at the educational opportunities they offer and also delve into the controversy that surrounds them.

Charter schools are not public schools, but they aren't exactly private schools either. Like public schools, they're free to attend for students within the school district, and they're typically funded by taxpayers. Like private schools, they can set their own rules for admission and choose which students they'll accept -- provided the schools follow all laws that forbid discrimination, of course.

To create a charter school, a group first must apply to an authorizing body. Groups might include a cluster of parents who have formed a non-profit organization, a university, or, in states which allow it, a for-profit organization. The group's plan for the charter school must meet the criteria set by the authorizing body, which vary from state to state or even from school district to school district. If the plan is approved, the authorizing body issues a charter. The charter is only valid for a limited period of time -- typically three to five years -- which allows the school's performance to be reviewed periodically when it's time for charter renewal. A struggling school might have its charter renewed for only a one-year period so the authorizing body can look for evidence of a turnaround.

Next, we'll talk about how charter schools are funded.

Further complicating the issue is the fact that charter schools have to fend for themselves when it comes to purchasing, building and maintaining the physical property of the school itself. Public schools can undertake large capital improvement projects through tax-payer funded bonds. Charter schools can attempt this type of funding, but it's difficult and often leaves the charter school with a higher interest rate than a public school would receive. As a result, charter schools turn to alternative means of funding. Donations from private individuals and corporations boost funding levels at some charter schools by 20 percent or more [source: Education and the Public Interest Center].

The bottom line when it comes to charter school funding is that the funding equation is not simple. Charter schools draw funding from a variety of sources and have to do a lot of work to bring up the amount they have to spend per pupil.

Up next, we'll take a closer at what makes a charter school different from a conventional public school.

The chief advantage of charter schools is that they aren't bound by strict curriculum regulations and other bureaucratic requirements. This allows them to focus on specific content areas, emphasize different aspects of education, offer innovative classes, and teach subjects that aren't always found in a typical public school. A charter school might assign more difficult assignments than students at a conventional public school would face, or place a heavy emphasis on writing skills. Charter schools can let students create independent projects and even alter the length of the school day or school year.

One example of a charter school taking an innovative approach to a high school curriculum is the Western New York Maritime Charter School in Buffalo, N.Y. In addition the usual classes required of high school students, every student is enrolled in the Navy Junior Reserve Officer Training Corps (NJROTC). They wear naval uniforms and hold NJROTC ranks. The school emphasizes a naval code of conduct; students participate in drills, color guard and other NJROTC activities. Students have helped refurbish a sailboat and can take sailing lessons. Many of the administrators in the school served in the U.S. Marines and U.S. Navy.

Charter schools aren't completely exempt from oversight and accountability, despite their flexibility. They must still adhere to the standards set by the state or local board of education. The students still have to take and pass standardized tests as required by the state, and school performance is generally measured by the students' scores on these tests. If a charter school's test scores fall too far below the scores in nearby districts, the school may be in danger of losing its charter and closing.

Charter schools may be innovative, but why are they so controversial? We'll talk about that next.

In 1988, a labor union representing school teachers, the American Federation of Teachers, developed the principles of charter schools as an indirect way to reform public schools. In 1991, Minnesota became the first state to pass laws allowing charter schools. California followed in 1992.

Numerous studies have been conducted on charter schools over the years. You'd think that would shed some light on the issue of whether or not charter schools are beneficial. Unfortunately, every study that supports one point of view is contradicted by two more that support the opposite view. The problem is that measuring education is tricky -- actually, it's almost impossible. There are too many variables to take into account, such as funding, student diversity, location, economic issues, cultural issues and a whole slew of other factors. Generating a meaningful comparison between groups or types of schools is extremely difficult.

So the controversy rages on. We've already discussed many of the advantages that charter schools claim. The National Education Association points out several problems:

There are elements of truth to all these complaints, but there are qualifying factors as well. For instance, charter schools are able to set high academic standards for admission. This often results in a waiting list or lottery system to determine who can attend the school, and students with poor grades may not make the cut. However, there are charter schools whose missions revolve around working with troubled students or raising the grades of students with academic problems.

While the question of charter schools seems complex, there's actually a fairly simple answer. Charter schools are like anything else: when they're well-managed and well-funded, they produce good results. The same can be said for public schools. In the end, it's really just a matter of choice.