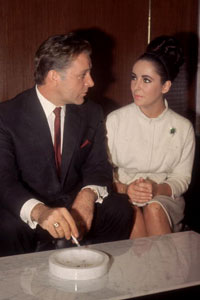 Elizabeth Taylor and Richard Burton would've made a compelling case study in the neurological and psychological underpinnings of breakups. The old Hollywood couple initially set the tabloids a-smolder when they were caught in flagrante during downtime from filming "Cleopatra" together. Taylor cut ties with her then-husband Eddie Fisher and tied the knot with her Welsh leading man in 1964. Ten years later, Taylor and Burton divorced, only to get remarried a year later and divorced again for good in 1976 [source: Nashawaty].

One wonders how their psyches could've weathered the romantic ups and downs in such quick succession. Especially since many adults rate relationship breakups among the worst events of their lives, the Burton-Taylor double divorce seems like the emotional equivalent of a hurricane on the heels of a tornado [source: Tashiro and Frazier]. At the same time, the pair remained close friends even after the final divorce, and Taylor remarried two more times, which also implies that they were somehow better equipped than some other people for saying goodbye to past love. After all, everyone handles breakups a little bit differently.

The permutations of breakup methodology and aftermath are as infinite as the number of relationships that sprout and wither across time. But from the ashes of those countless lost loves, relationship research has condensed individual experiences into averages that allow us to architect a framework of generalized expectations for handling heartbreak -- and learn best practices for tending and mending bedraggled spirits. This type of interpersonal instruction comes at a serendipitous moment as well, since American adults are likely to endure more breakups these days before settling down, care of the modern trend of them delaying marriage until their late 20s. While simultaneously affording people more time to find a suitable match, this delay leaves open a wider window for romantic letdown in the meantime.

To get started with this primer on parting ways, let's take a bird's-eye view of breakups and find out how, when and why they tend to happen.

Love Potion No. 9: Top 5 Love Chemicals in the Brain