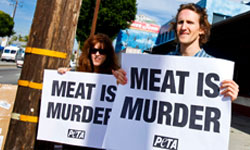 It turns out that the mid-1940s were the salad days of sorts for vegetarianism due to meat shortages brought on by World War II [source: Iacobbo and Iacobbo]. As a result, Symon Gould, editor of American Vegetarian magazine and leader of New York's Vegetarian Society, decided to capitalize on the moment and transform the dietary and lifestyle choice into a political cause. In 1947, Gould and a group of naturopathic doctors, who relied on nutrition and fasting rather than medicine to treat ailments, organized the American Vegetarian Party. The group selected as their presidential candidate 84-year-old vegetarian restaurateur John Maxwell, who told TIME magazine he had "tasted no meat for 45 years" [source: TIME].