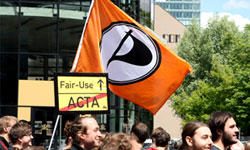 The Pirate Party isn't interested in actual looting or pillaging, although some might assume that those are members' virtual intentions. The United States Pirate Party is affiliated with the Pirate Parties International, which bands together Pirate Party operations in more than 20 nations around the world [source: Pirate Parties International]. Although agendas may shift on a country-by-country basis, the major crux of the Pirate Party mission is defending online privacy, which includes allowing people to freely share files across the Internet and preventing online censorship. As of 2012, the United States Pirate Party exists in only seven states, but its designated captains and first mates that head up statewide organizations are working to broaden the pro-Internet freedom agenda.

To grow its numbers, American Pirate affiliates might be wise to look at how the party has penetrated traditional government structures in Germany. In 2012, the Web-savvy German cohorts won four parliamentary seats and wooed enough followers, reportedly weary of old-school politics, to potentially make it the nation's third-largest party [source: Kettmann].