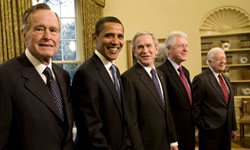 In American politics, "dynasty" is a dirty word. The Founding Fathers, after all, went on record as wholeheartedly objecting to power flowing through blood rather than ballot, declaring in the U.S. Constitution that "no title of nobility shall be granted by the United States." The narrative of one of the country's most prominent political families, the Kennedys, even avoids the dreaded d-word. Rather than referring to the New England clan as a dynasty, it's romantically painted as Camelot.

In reality, however, it took just about as much time for the ink to dry on the Declaration of Independence as it did for American politics to become another type of family business. In 1848, for example, more than 16 percent of congressional seats were filled by someone whose relative had previously held the position [source: Kieley]. Moreover, a 2006 study found that Congress members who serve more than one term have a 40 percent chance of someone in their family later ending up in Congress [source: Alexander]. That doesn't imply that these family trees are full of rotten apples, but they may cultivate relationships and connections that can help siblings, cousins and in-laws win elections as with any successful business operation.

The following American dynasties certainly understood how to pool their resources and convert their last names into impressive and long-lasting political brands.