What are witch windows? 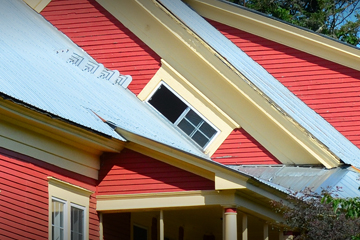 The actual reasons for witch windows are rather practical, but the folklore behind the name is a lot more interesting.
Larry Lamsa/Flickr

Driving through the scenic countryside in the state of Vermont, you might see some anomalies in the architecture odd enough to make you do a double take. On the second floors of some older houses (and a few newer ones), a window appears to have been installed incorrectly -- at a 45-degree angle. What was the builder thinking? If the window didn't fit right, why not just put in a smaller one? Or why install one at all?

Vermonters know these off-kilter windows as witch windows, "coffin windows" or "Vermont windows." Nearly exclusive to Vermont, they began popping up in homes around the 1830s, and you can still see them on some houses today [source: Vermontpedia]. The actual reasons for these odd windows are rather practical, but the folklore behind the names is a lot more interesting.

Why call them "witch windows?" According to an old superstition, witches on broomsticks can't fly through angled windows. The reasoning behind this is that their broomsticks simply wouldn't fit. (We're not sure why the witches couldn't just turn sideways, but that's not for us to know.) Therefore, building an angled window into a home would prevent witches from attempting to enter.

The "coffin windows" nomenclature comes from another widely believed piece of Vermont folklore. Because older homes typically had narrow or twisty staircases, it was difficult to maneuver a coffin up or down the stairs if a family member died. Folklore says that these windows were placed into homes so undertakers could remove coffins more easily via the window.

However, in reality, witch windows serve a more useful purpose. When people added a side wing to their homes, this new addition typically obscured the gable wall, or old side of the house. This meant losing a lot of ventilation and light in the rest of the house. However, sometimes there wasn't enough room on the outside wall to install a regular window, and putting in a custom-built window wasn't cost-effective. In the interest of practicality, some Vermonters instead installed a regular window, just tilted at a 45-degree angle to make it fit. The tilted window still let in light and homeowners could still open it to allow fresh air into the house. And, in many cases, the window was repurposed from leftover materials from construction of the new addition. An imaginative and earth-friendly solution, even back in the 1800s.

Why this architectural phenomenon is exclusive to Vermont is unknown, but it adds a dash of uniqueness to the landscape and an interesting story for out-of-towners.