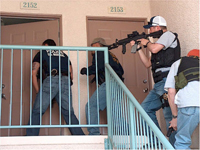 U.S. Marshal multi-agency team knock and announce during an operation.
Courtesy of the U.S. Government

The U.S. Marshals are a federal law enforcement agency responsible for the protection of federal courts and enforcement of decisions made by those courts.

The U.S. Marshals manage an airline devoted solely to transporting prisoners. The Justice Prisoner and Alien Transportation System (JPATS) facilitate prison-to-prison transfers, move convicts from holding centers to prisons and transport suspects when they are extradited for trial. JPATS own or lease a variety of aircraft, buses and vans to move prisoners - roughly 300,000 of them each year [Source: U.S. Marshals]. Not only must the prisoners be moved safely and securely, they must also keep to strict trial schedules.

The Witness Security Program (aka the Federal Witness Protection Program) protects high-risk witnesses from reprisal, usually in organized crime trials. This can range from giving the witness and his family a secure and guarded facility to live in for the duration of the trial, to providing a new identity in a different part of the country to permanently “hide” them from criminals. The U.S. Marshals have administered this program and protected over 7,500 witnesses and their families since the program’s inception in 1970 [Source: U.S. Marshals]. The Marshals claim a perfect success rate, with no witnesses being harmed while under protection as long as all security procedures were followed.

Courtesy of the White House A protected witness guarded by U.S. Marshals.

U.S. government to seize assets used or earned in the commission of certain crimes, most notably drug crimes. The cash, cars, boats and homes can then be used or sold off to fund law enforcement initiatives. The U.S. Marshals are responsible for taking possession of, holding and distributing these seized assets.

When necessary, U.S. Marshals can be called on to serve in any situation where their expertise could be valuable. The Marshals employ a Special Operations Group; specially trained officers who work like a local police force’s SWAT team, but at a federal level. Marshals have been called in during periods of civil unrest, such as the L.A. riots.

is a fugitive tracking operation that recently wrapped up its third phase. FALCON III aimed to find and apprehend wanted felons who were required to register as sex offenders, but failed to do so, and wanted felons with known ties to criminal gangs. Geographically focused in the eastern United States, FALCON III resulted in the capture of 10,733 wanted felons [Source: U.S. Marshals].