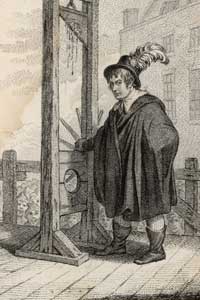 No image better illustrates the French Reign of Terror than the guillotine, which the revolutionary government used to execute thousands.
Hulton Archive/Hulton Archive/­Getty Images

­Targeting civilians with violence may be as old as war, and war may be as old as humanity itself, but our use of the word "terrorism" only dates back to the 1790s. France's new revolutionary government had just taken control of a country rife with rebellion and civil war. The "enemies of the Revolution" were plentiful and, on Sept. 5, 1793, the government enacted a decree to deal with them. Mass arrests were made and soon suspects' rights to trial and legal aid vanished as well. The Committee of Public Safety wielded the powers of acquittal and death. This period became known as the Reign of Terror, and before its end on July 27, 1894, an estimated 17,000 men and women were sent to the guillotine.

The goal of terrorism is never to simply control the immediate recipients of the violence, but to reach a wider audience by creating an atmosphere of fear and anxiety. With tyrannical governments, the message of so-called establishment terrorism is usually "obey or else."

Maintaining rule of law is one of the basic tenets of government, and the ultimate deterrent to unlawful behavior is almost always violence [source: Davidson]. If you fail to pay your taxes, for instance, enough inaction on your part will inevitably lead to law enforcement officers showing up at your door to take you away. When all the bureaucratic avenues have been spent, law comes down to force. The difference between a free society and one living under terror can be seen as a matter of degree. How soon does physical violence materialize in a nation's enforcement of law? How often does a government exercise its power to kill and disenfranchise?

The French certainly didn't invent the use of state-controlled violence on domestic enemies. History books contain plenty of examples of totalitarian terror campaigns, from the Nazis and Stalinists of the 20th century to the ancient Romans and beyond. As long as there have been governments to rebel against, there have been violent attempts to repress the rebels. Military dictatorships often prove useful examples of this.

Augusto Pinochet's rule in Chile, for example, was marked by the repression of leftist politics. Allegations of human rights violations emerged over time, including accusations that the regime kidnapped and murdered leftist citizens. From 1973 to 1980, Chile joined with several other South American nations to form "Operation Condor," an intelligence-sharing effort to crack down on insurgents and, yes, ­terrorists.

Ruling with an Iron Fist

In 2008, democratic watchdog organization Freedom House compiled a list of the countries with the world's most repressive regimes: Cuba, Libya, Myanmar, North Korea, Somalia, Sudan, Turkmenistan and Uzbekistan. They also singled out China's territorial control of Tibet and Russia's handling of Chechnya.