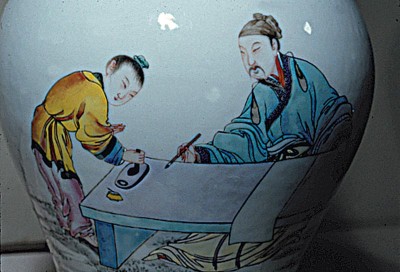 The mixing of ink for use in calligraphy is an important task in Taoism.
©2007 Publications International, Ltd.

The art of calligraphy is related to Taoist philosophy as an expression of Tao. In some ways, calligraphy is an art related to Chinese painting since it, too, uses brush and ink. It is the practice of forming lines on paper in a particular way.

At its highest level, calligraphy is the art of expressing inner understanding. The lines created by a calligra­pher are known as characters and each one symbolically represents an idea or even a part of an idea. These lines are the Asian counterpart to the Western alphabet.

While there are many differences between the Western and Asian systems of writing, one of central importance is that to the calligrapher an idea is expressed not only by the character itself but in the quality of its execution. Exactly how the character is created is of paramount importance. For calligraphers, then, this quest for the formation of ideal characters is deeply personal.

The key to success in this discipline lies in being close to Tao. Proper composition of a line is simply not possible unless the inner being of the calligrapher is also perfectly composed. Here again, we see the idea of an inner, psychological world corresponding with the outer world.

Over time, critics of calligraphy have pinpointed a number of major shortcomings found in beginning students. The weaknesses are reflections of the students' inner being. And so, the exercise is for students to develop internally to the point where the weaknesses are replaced by strengths. Together the defects are known as Pa-Ping, or "The Eight Defects." Since these are common to all, identifying them can help students with Tao.

Critics of calligraphy rely on four categories for their analysis. For example, a character is said to possess varying degrees of bone, flesh, muscle, and blood. When these qualities are in the right proportions, the work is living. It expresses Tao. How better to evaluate the composition of a character than to compare it with something alive and healthy?

Each character, for example, must demonstrate inner strength, known as bone. It must also have the correct proportion of flesh so that it is neither too fat nor lean. Its blood (a quality related to the amount of water mixed with the ink) must be healthy in color. The quality of muscle in the work is left for the viewer to decide.

In this way, the calligrapher's work becomes an expression of life itself. How is it that there are so many rules and such rigorous discipline in an art that seeks to express the inexpressible naturally? Such is the mystery of the Tao.

Meditation and the Mortar and Pestle

It is a compelling sight to watch calligraphy students mix their ink in preparation for painting. Sitting cross-legged in front of little wooden tables, dressed in their robes, they make the ink.

The ink is in the shape of a stick, and together with some water, it is mixed in a small circular container made from slate. The substance is very gradually ground up and made first into a paste and then finally into a smooth, flowing liquid.

Immersed in their task, the artists pay no attention whatsoever to onlookers. Deep in meditation, they are totally oblivious to outside distraction. Beginners in calligraphy are often instructed to contemplate the work they are about to imitate. Those more advanced simply empty their minds.

Such is the intensity and depth of concentration required in Chinese calligraphy. More than simply a preparation of the materials, grinding the ink is a time-honored tradition. It is a form of meditation and so, by preparing the ink, the artist is also preparing personally. By watching someone prepare in this fashion, it is possible to steal a glimpse of Tao.

Learn more about the concept of chi and what it has to do with Taoist philosophy on the next page.

To learn more about Taoism and tai chi, see: