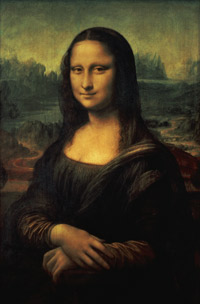 Welcome back. The famed "Mona Lisa" was stolen from the Louvre by an Italian custodian in 1911.
Leonardo da Vinci/The Bridgeman Art Library/Getty Images

When Leonardo da Vinci's "Mona Lisa" disappeared from the Louvre museum in Paris in 1911, the world was shocked. The theft went undetected for days. Museum staff saw the empty sp­ace on the wall and assumed the painting had been moved to the Louvre's restoration center for upkeep. But by the second day, the Louvre called the police.

The theft of the "Mona Lisa" by museum worker Vincenzo Perugia was brilliant in its simplicity. It's unclear what type of security the museum used at the time, but some facts are known for sure. After Perugia's shift ended on Sunday, he hid in a room. When everyone had gone home, he left his hiding place, took the "Mona Lisa" off the wall, removed it from its frame, stuck the priceless work under his shirt and walked out into the night.

­One might think museum security has vastly improved since 1911, but most museums don't have the money to invest in million-dollar systems, let alone the crisscrossing laser-beam detectors that protect priceless objects in the movies. Compared to banks and jewelry centers, museums are easy targets -- and it shows. In the last 20 years alone, thieves have pulled dozens of major paintings off museum walls, including 20 works by Vincent Van Gogh in a single Amsterdam heist in 1991. Edvard Munch's "The Scream" has been stolen twice in the last 15 years.

Due to a variety of circumstances, thieves take paintings from museums on a fairly regular basis, and with much less planning and finesse than Thomas Crown. In this article, we'll find out how people walk out of museums with some of the world's most priceless works of art, including how a gang pulled off one of the biggest art thefts in European history in February 2008.

So how do people steal a Cézanne, a Van Gogh, a Degas and a Monet in broad daylight in this day in age? It's actually not that hard.­ 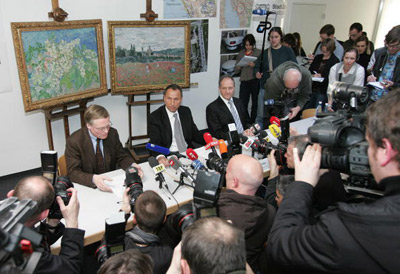 Two of the four masterpieces stolen from the E.G. Bürle Foundation museum in Zurich were recovered.
Nicholas Ratzenboeck/AFP/Getty Images

Perugia's successful snag of the "Mona Lisa" in 1911 was certainly more subtle than recent heists. In 1990, thieves robbed the Isabella Stewart Gardner Museum in Boston of about $250 million in paintings, including three Rembrandts, five Degas sketches and a Manet [source: Crime Library]. They dressed in fake police uniforms and were let in by guards after hours.

At the Swedish National museum in 2000, men brandishing a machine gun got away with a Renoir and a Rembrandt. Before the robbery, the thieves laid spikes on the roads leading to the museum; and at the time of the robbery, accomplices set off bombs in two other parts of the city. The chaos resulted in a slow police-response time and a successful $30 million haul.

Two men stole "The Scream" from the Munch Museum in Oslo, Norway, in 2004 with nothing more than a handgun.

A 2008 robbery in Zurich proved that all you really need to steal priceless art is a gun. Three men raided the E.G. Bürle Foundation museum in Zurich, Switzerland, with as little manpower and planning as the 2004 Oslo robbery. While the museum was open to the public on Feb. 10, the three thieves walked in and took four French Impressionist works of the wall. One man pulled out a gun and had everyone in the small museum lie down, while two others took the four paintings closest to the door. Authorities don't believe they were targeting any specific work, since all four paintings were on the same wall.

The thieves ran from the museum with Paul Cézanne's "Boy in the Red Waistcoat," Claude Monet's "Poppy Field at Vétheuil," Edgar Degas' "Ludovic Lepic and His Daughter" and Vincent van Gogh's "Blooming Chestnut Branches," all still in their protective glass cases. It may be sheer luck that they grabbed the Cézanne -- the most valuable painting in the museum's collection [source: New York Times].The four paintings together are worth approximately $163 million.

Surprisingly, two of the paintings, the Van Gogh and the Monet, were found just 10 days later by a security guard in the back seat of a car parked in a nearby lot. Police think the four works may have simply been too heavy to carry around in their protective glass, so the thieves abandoned two. The Cézanne and the Degas, like hundreds of other recognizable paintings, including Rembrandt Harmenszoon van Rijn's "Storm on the Sea of Galilee," are still out there. According to the FBI, only about 5 percent of stolen masterpieces are ever recovered [source: CNN].

One has to wonder, if these works are so recognizable, how can thieves try to sell them without getting caught? How can this type of art theft be profitable? It turns out that one of the quickest ways to get money for the paintings is incredibly counter-intuitive.

A bizarre law in the Netherlands makes grabbing a work of art especially appealing if a thief is very patient. A stolen painting becomes the rightful property of the person who stole it after 20 years have passed. After that, the thief can actually sell it on the open market. [source: Crime Library]. 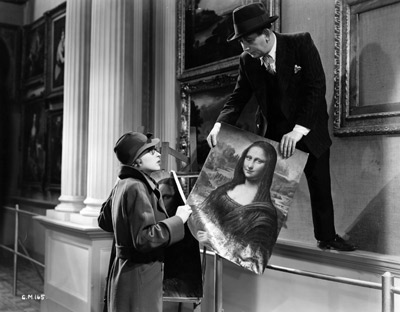 In a scene from the 1937 movie "Good Morning Boys," Mark Daly and Lilli Palmer swap the real Mona Lisa for a copy. Art heists have grown more and more common.
Hulton Archive/Getty Images

With art prices skyrocketing, museum thefts are on the rise. It might even be more profitable to steal a Picasso -- or, in the case of the Zurich heist in February 2008, a Cézanne -- than a bag of diamonds. Some recent thefts have proven how easy it can be to take a painting. But how can thieves sell "Boy in the Red Waistcoat" if the whole world knows it was stolen?

There are really only a couple of ways to do it:

Thieves can sell the painting to an unscrupulous art dealer or collector. While it's not the most common way to get rid of a well-known work, there are always people out there who will buy a stolen masterpiece. The thieves have to know exactly whom to ask, though. And they'll be selling the work for less than 10 percent of market value [source: CNN]. That's still a lot, though, with the price of art these days.

If the painting is very recognizable, it'll probably never end up on the open market, selling for what it's worth. But if the world has given up looking for a lesser-known work, a sort of art-laundering can take place. The first dealer might sell it quietly for a low price, getting a quick sale to avoid attention. If the painting then changes hands a few times in non-public deals, it can eventually end up at public auction with no red flags going up, since the owner listing it is, in fact, the legitimate owner. If the auction house doesn't check up on the painting, it can slip through the cracks.

Director Steven Spielberg discovered he had a stolen Norman Rockwell painting in his collection in 2007 and immediately alerted the authorities [source: MSNBC]. The work had been stolen from a museum in Missouri in 1973. He'd paid $200,000 for the $700,000 work of art in what he believed was a legitimate sale [source: CNN]. The FBI believes the painting had been sold "legitimately" at least twice before Spielberg bought it.

Thieves can also sell the painting as a fake. The easiest and most common way to make money from stolen masterpieces is to sell the real thing as a very high-quality replica. This way, thieves can sell the work on the open market. They get far less than what it's worth, but when the original is worth 10 or 20 million dollars, they can still walk away with a nice profit. The FBI believes that many of the stolen masterpieces that are still missing are sitting in the collections of legitimate buyers who think the work is a fake.

If the thief doesn't want to risk a sale, he or she can always hold it for ransom or return it for the reward money. For a priceless work of art, museums and their insurance companies are willing to pay a lot for recovery, even if the robbers go free. The Boston museum robbed in a $250 million heist offered $5 million for information leading to the paintings' whereabouts, but met with no success. For the 2008 Zurich heist, an unknown entity has offered a $90,000 reward for information on the two missing masterpieces [source: CNN].

There are more than 30,000 works of art listed on the international Art Loss Register, and the FBI estimates the market for stolen art to be in the area of $6 billion a year.