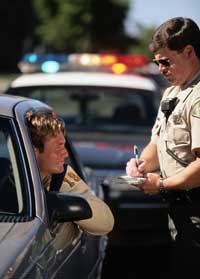 In 2006, more than five million car crashes occurred on U.S. roads, resulting in 117 deaths per day on average [source: National Highway Traffic Safety Administration]. Given those statistics, you can see why highway patrol is one of the most important state trooper duties. It is also the first job given to many new troopers.

When accidents happen on the highways, state police are often the first responders to the scene. If they involve injuries, troopers can call in the appropriate medical help. For major accidents, some state police employ collision reconstruction units that record exactly how a crash occurred. That information can then be used in court for determining who was at fault and whether criminal activity was involved.

As mentioned earlier, some states have highway patrol departments that have specific authority over state roads and property. California has the largest highway patrol force in the nation, with nearly 10,000 officers [source: FBI]. Although their law enforcement work is done mostly from the roads, they deal with many types of non vehicle-related crimes. For instance, North Carolina Highway Patrol officers seized 6,189 pounds of marijuana in 2007 [source: North Carolina Highway Patrol].

When you see state patrol cars camped out on the side of the road, they are watching for various driving infractions, such as expired tags, with a particular eye for speeders. Speeding contributes to about 31 percent of car-related fatalities and racks up more than $40 billion in related expenses [source: National Highway Traffic Safety Administration]. Because of the high risks, speeding tickets are the most common traffic citation given [source: FindLaw].

To catch these speed demons, state troopers have a few different tools at their disposal. Radar guns measure speed by detecting the frequency of radio waves between the stationary police cruiser and a car moving on the road. Lasers, which are more expensive and used less frequently, can also detect a car's speed with more accurate precision. During police chases, stop sticks may come in handy. Trained officers can put these planks with sharp nail-like projections in the path of a renegade car to puncture its tires and bring it to a halt.

Troopers also keep their eyes peeled for impaired drivers. In 2006, 1.4 million people were arrested by state and local police for driving under the influence of alcohol or drugs [source: FBI].

Some state troopers are limited to patrolling state or public property, such as airports.
Darren McCollester/Getty Images

Road safety involves commercial vehicle enforcement as well. Many state police departments monitor the safety of large cargo trucks on the roads through check points and weigh stations. Commercial truck drivers are required to stop at weigh stations where state troopers, or other transportation officials, may weigh the truck, verify the driver's commercial license and ensure that the vehicle isn't stolen or carrying illegal cargo. For more information about weight stations, read How do truck weigh stations work.

Now that we know how troopers keep the roads safe, let's look at the types of criminal investigations state troopers conduct.

The Texas Rangers is the oldest law enforcement agency with statewide jurisdiction in the United States. It was formed in 1835. In the beginning, the Texas Rangers were a cross between cowboys and police officers. Roaming the virgin land on horseback, the Rangers' job was to protect new settlers from Native American attacks and other dangers. Today, the Rangers are an investigative arm of the Texas Department of Public Safety. To be eligible to become a Ranger, an applicant must have eight years of law enforcement experience with an investigative background, along with the other routine requirements.