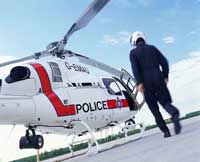 Some state police helicopters have heat sensors to track where marijuana is being grown indoors.
Simon Whitmore/Getty Images

State troopers, while sometimes smaller in number, are often rich in resources. Because they must be equipped to handle a multitude of situations across the geography of their state, troopers are sometimes trained in special units. Although states will vary in what they offer, here are some of the more common special units:

A state police officer guards a crowd at the inauguration of Gov. Arnold Schwarzenegger.
AFP/Getty Images

Next, find out how the patrol and investigative branches work together to affect crime. ­