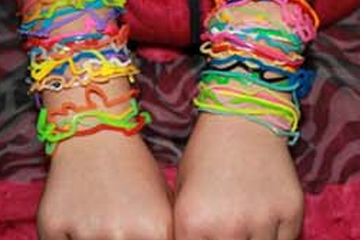 Everything in moderation -- including Silly Bandz.
Courtesy of BCP Imports

While Silly Bandz were certainly marketed as a fun, playful accessory for kids, others saw far more insidious reasons that children were interested in the accessory. One of the ideas floating around was actually quite disturbing: that school kids were using Silly Bandz to denote and engage in sexual acts.

Naturally, this was much more media maelstrom than it was credible. It seems like every few years, there's an alarmist story about how kids are using some benign object to signal their sexual experience or desire. Remember the idea that if you pulled the tab of a soda can, it somehow meant you could redeem it for a kiss? Or that removing a label from a beer bottle without tearing it meant something sexual? In 2003, the bracelets-signaling-sex-acts angle first popped up, with the idea that different colored bracelets meant a different activity could be asked for if a boy "snapped" one off a girl's wrist [source: Haberlin]. This was never confirmed by any actual kids. It reappeared briefly when Silly Bandz became popular and was just as baseless.

Another rumor circulating around elementary schools claimed that Silly Bandz were made from recycled -- and used -- condoms. Never mind the practicality of throwing used condoms in the recycling bin; clearly, this one is unfounded [source: Silly Bandz].

Some of the Silly Bandz rumors aren't so innocuous. In August 2010, there were alarming reports that Silly Bandz were causing injury to kids by cutting off circulation to their hands and arms, while also causing skin irritation or even wounds. This story also came out virally after an image was disseminated through e-mail about a preschooler who had suffered such an injury.

Unfortunately, this one checks out. Although Silly Bandz themselves present no harm, it's certainly true that everything should be done in moderation. Wearing stacks and stacks of bracelets for days at a time can, in fact, affect circulation by causing a tourniquet-like constriction of blood vessels. The easy solution to this? Just wear a few bracelets for a short period of time. And remember: They're Silly Bandz, not Seriously Scarring Bandz, so take them off if your wrist starts hurting [source: Fox News].

Speaking of taking bands off, where exactly are we now in the craze? As of this writing, February 2012, it would appear that Silly Bandz have exited the collective mind of schoolchildren as quickly as they entered it. No longer are there breathless stories about them in the news, but they do still pop up on celebrities like the Kardashians and others. Attempting to really branch out, Silly Bandz even created a video game based on the popular bracelets [source: Neumeier]. Kind of a stretch, even for rubber bands.

So while the tail end of the fad appears to be upon us, don't you worry: Like most trends, there's always hope for a nostalgic (or ironic) comeback.

To learn lots more about trends and the strange things we do for fashion, snap on over to the next page.