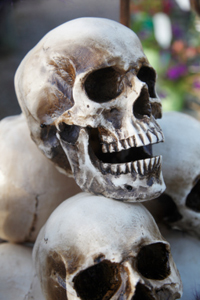 Following removal of the skin and scalp, the Shuar discard the skulls of the victims.
Derek E Rothchild/Getty Images

The Shuar lived spread over a comparatively large geographic area, so raiding parties often traveled for days to carry out attacks. The process of shrinking an enemy's head can't wait until the raiders return home, so the raiders begin the process on the way back. The leader of the party, typically an aged warrior related to the raiders who doesn't attend the raid, meets the raiders at a camp outside the village. He's in charge of leading the incantations and rites associated with transforming the head into a tsantsa -- the ritually shrunken head.

The steps in this process will be carried out in camps along the way back home. At each of the stages in preparation, the party leader -- called the curaka -- presides over the process. The members of the raiding party are attentive to each step, reinforcing the curaka's actions. During this process, and for some time to come, the warriors abstain from certain foods, from sex and from other practices, like hunting alone. There are spirits being held at bay by the process and not following the rituals is dangerous.

The head of the victim is first prepared by cutting from the base of the ear down or from the base of the skull, either way creating a flap that begins to loosen the skin from the skull. Muscles and tissue that connect the skin to the skull are severed with a knife. The skull is generally thrown into a nearby river. The eyes are removed and discarded and the cartilage that anchors the nose and ears are cut away, leaving just the skin and hair that makes up the face and scalp; imagine a rubber Halloween mask. Although separating the skin from the head can take a skilled preparer as little as 15 minutes, enough finesse is used that the facial characteristics of the victim will still be recognizable after shrinking [source: Jandial, et al, National Geographic].