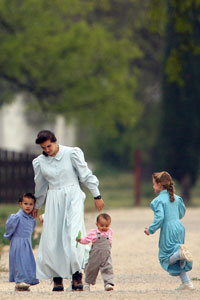 Most people associate North American polygamy with images of the FLDS and the 2008 raids on the Yearning for Zion compound in Texas.
Mike Terry/Deseret Morning News/Getty Images

To those on the outside, Fundamentalist Mormon polygamy may look like a free-for-all, all those women and children, and children holding younger children. In fact, there are rules guiding polygamy just like there are with any other type of marriage. There's no "Polygamy Rule Book" to refer to -- these are outlaw societies, after all -- but some of the guidelines are clear.

Fundamentalist Mormons are not simply polygamous. Polygamy means "plural marriage" and includes polyandry, between one woman and multiple men; group marriage, between more than one woman and more than one man; and polygany (with an "n"), between one man and multiple women. The latter is the most common type of plural marriage in the world, and it's the one Fundamentalist Mormons practice. There are no polyandrous or group marriages in these communities.

The Prophet must agree.

Each Fundamentalist group has a Prophet, and that Prophet, as God's messenger, grants the right to marry. In most sects, members will ask his permission to form a marriage, and he will allow it or not.

In the FLDS, which is the Warren Jeffs Community, it is believed that Jeffs actively arranged marriages, placing women (or, as is charged, young girls) with husbands according to God's determination.

In order to be worthy of marriage and family, a man and his wives must be in good standing with God. Prophets have the power to "reassign" a man's wives and children if that man is deemed unrighteous. This is believed to be a rare occurrence in most sects.

The Divine Principle begins with fruitfulness. Having many children is at the core of the practice, and men and women are expected to multiply. The more wives a man has, the more children he will father.

While there certainly are differences between the various sects in the details, it is within these basic guidelines that Fundamentalist Mormons practice polygamy. It's ordered by God, guided by the prophet, and for the overarching purpose of producing children.

Although, most of those practicing the principle will tell you that it is also, as much as any other marriage, about love.