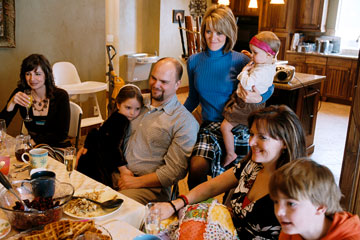 Sunday is usually the only day of the week when polygamous husband Joe, his three wives and their 21 children are able to all share a meal together.
Stephan Gladieu/Getty Images

By various estimates and definitions, there are anywhere from five to more than a dozen different sects within the Fundamentalist Mormon community, each with its own Prophet and living space. At one point, they were all one group of Mormons excommunicated for maintaining a polygamous lifestyle, and many of the break-off sects are still connected financially in one way or another, sometimes via land rights or corporations.

Fundamentalist Mormons are spread out around the American West and in parts of Mexico and Canada. Their numbers are hard to pin down due to the secretive nature of their polygamist lifestyles, but most estimates are between 30,000 and 50,000.

The largest of these sects is the FLDS, or Fundamentalist Church of Jesus Christ of Latter Day Saints (primarily in Arizona and Utah). With about 10,000 members, it comprises perhaps 25 percent of Fundamentalist Mormons. The next largest is the AUB, or Apostolic United Brethren, also known as the Allred Group (primarily in Utah). Its numbers are in the area of 7,500.

Other, smaller sects have anywhere from a hundred to about 1,500 members. They include the Centennial Park Group (Arizona), the Davis County Cooperative Society (Utah), the Church of the Firstborn (Mexico), the Bountiful Groups (Canada), the Confederate Nations of Israel (Utah), the True and Living Church of Jesus Christ of Saints of the Last Days (Utah), and the Missouri Community (Mormons settled in Missouri after Joseph Smith revealed the Second Coming would take place there).

While it's true that some of the wives in polygamous marriages receive government support (only the first wife is legally married -- the others are single mothers), Fundamental Mormons also run farms and have construction companies. They work on construction projects -- legitimate ones -- all over the West and Mexico, and, with a few exceptions, interact with those outside their sects. In most cases, the people they work with outside their communities simply look the other way on the polygamy issue. It's illegal, but in many areas, particularly in Utah, outsiders practice a certain degree of lenience toward the religiously sanctioned plural marriages.

Polygamy, while invariably illegal throughout North America, is still a form of marriage. As such, there are guidelines regarding the way Fundamentalist Mormons form their commitments and carry them out. Perhaps the most basic one is this: Only a specific form of polygamy is sanctioned.