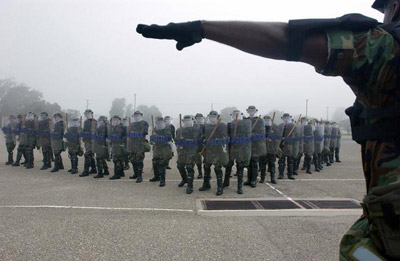 Today's riot control units aren't usually called riot squads -- they are crowd-management units. Instead of trying to "beat" the rioters in battle, the police just try to calm them down and get them to go home. The use of force, even non-lethal force, is a last resort.

The first step in crowd management is making sure a riot doesn't happen in the first place. Although sometimes riots erupt unexpectedly, they are frequently tied to planned protests and organized strikes. When the police think there is the potential that such a situation could get out of control, they contact the organizers and leaders of the protest or strike ahead of time. They set up ground rules that the protestors are to follow, and they designate a specific area for the event to happen in. The police assign specially trained officers to monitor the event. The point is that the police will simply provide a presence and work to ensure that everyone stays safe. Only if the ground rules are broken will any police action be needed at all.

Even if the officers themselves disagree with the opinions of the protestors, they are trained to maintain an unbiased attitude. "That's part of America," said Sgt. Bauer of the Cheektowaga Police Department. "You're allowed to have a voice." The officers try not to look at the protestors as enemies. Instead, they recognize that they are part of the community that the police are entrusted to protect and serve. "You can't go in like stormtroopers," said Sgt. Bauer.

While officers are trained to stay polite with the people in the crowd, they are careful to not give off an air of subservience. The police have to be seen as being in charge and in control at all times, even while they stay passive and allow the crowd to operate within the ground rules set out ahead of time.

Sometimes, though, these preventative measures don't work, and a riot breaks out despite police efforts to keep everyone calm.

A lot of the methods used by police and soldiers to control riots in the past actually made riots worse. In fact, only in the last few decades have effective riot-control strategies been developed.

Earlier riot-control squads had a "police versus the rioters" mentality. They approached a riot like a battle in which they had to beat or shoot the rioters into submission. A riot squad would form a skirmish line and charge into the rioters with nightsticks swinging. Often, they would try to pin the rioters into a corner to leave them no escape. This only intensified the rioters' fear and anger and escalated the violence.

There are many instances in which police assigned to assist people and stop rioting instead chose to take sides in the riot. This could amount to simply standing by and watching while the riot went on or actually joining one side to fight against the other if the riot consisted of two opposing groups. In the worst situations, otherwise peaceful crowds were attacked by police. In these cases, it was the police themselves who were the rioters.