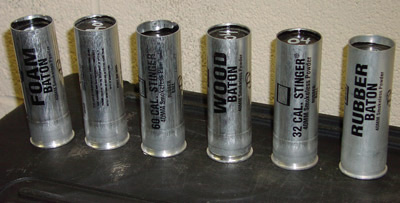 Some of the rounds available to riot-control officers include:

Blunt-force rounds - These rounds cause pain when they strike, but they don't penetrate the skin. They are often fired at the ground so the round skips off the pavement and strikes the rioters in the legs.

Stinger rounds - A Stinger round is loaded with small, rubber pellets that disperse on impact. Pepperball rounds - A paintball gun is slightly modified to fire pepper-spray pellets instead of paintballs. When these strike someone, the severe burning sensation in the eyes and nose will incapacitate most people without doing permanent harm. When children or elderly people might be present in a crowd, the police can instead use water pellets. It still stings to get hit with water pellets, and sometimes people are afraid they have actually been hit with pepper spray, so the crowd disperses.

Aerosol grenades - These are metal canisters that are activated and thrown like regular grenades. They spray O.C. or C.S. gas (see below) over a wide area. Officers rarely throw these directly into a crowd, as this just causes panic. Usually, they use the gas as a sort of barricade to direct the crowd's movements in a certain direction. If a particular group of rioters were extremely violent (for example, if they were gathered around and beating a single victim), then a gas grenade might be thrown into the group to get them to run away.

Ferret rounds - Ferret rounds are made to penetrate windows or wooden barricades, where they can then deposit a load of gas. These are used to flush people out of barricades and other standoff situations.

Dye rounds - Sponge rounds, ferret rounds and pepperball rounds can all be filled with marker dye. These are used to mark certain people in a crowd so that other officers can identify them or so that they can be caught later in case they flee the scene. In a riot, the leaders are often tagged with marker-dye rounds so the arrest team can pick them up later.

Gas rounds - These rounds are loaded with a gas that causes severe irritation to the eyes, nose and throat, and even causes contact skin burns in some cases.

Officers don't like to use gas rounds, because they know they're going to experience some of the effects of the gas themselves. Still, they wear gas masks and goggles to protect themselves in case the need arises.

Another tool that crowd-control forces may rely on is the use of animals. Horses and dogs can be very effective at intimidating rioters. Plus, these animals are relatively unaffected by C.S. gas, which makes them ideal for riot situations.

In June 1943, racial tension was close to the boiling point in Detroit, Michigan. Following a race-related fight at an amusement park, false rumors whipped both blacks and whites into a murderous rage. In the black community, the word was that some white men had thrown a black woman who was holding a baby into a lake. Whites repeated news that a mob of blacks had assaulted a white woman.