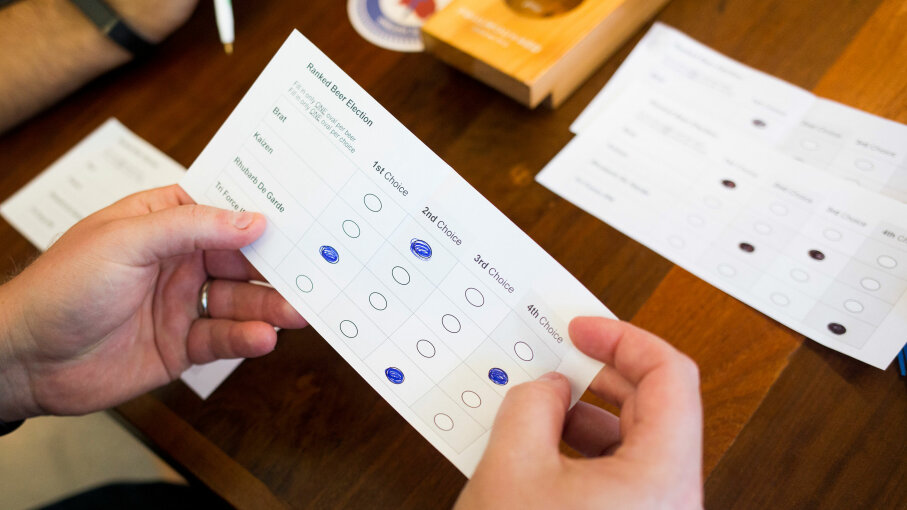 Kyle Bailey, campaign manager for the Committee for Ranked Choice Voting, counts up the votes in a demonstration of ranked-choice voting at Foulmouthed Brewing in Portland, Maine. Maine is the first state to use ranked-choice voting for statewide races. rianna Soukup/Portland Press Herald via Getty Images

Across the U.S., increasing numbers of people are sick of a hyper-partisan political system they see as deeply dysfunctional. In a May 2016 AP-NORC poll, only 13 percent of Americans believed that the traditional two-party setup is working OK, compared to 38 percent who think that it's seriously broken. And we're clearly discontented with our choices on the ballot. Just 29 percent of Democrats and 16 percent of Republicans had a great deal of confidence in their own parties' ability to run the country [source: Swanson].

With that widespread disillusionment, many Americans simply don't bother to vote at all. Only 55 percent of eligible citizens cast ballots in the 2016 presidential election [source: Wallace].

Some say there's a better way. They argue that the problem with the traditional winner-take-all system (also known as plurality voting) is that only the two major-party candidates have a realistic chance of winning, and third-party candidates are relegated to being spoilers. Major-party candidates can focus on their base, ignore the views and concerns of people in the middle, and still win, sometimes with less than majority support.

But what if we had elections in which voters, instead of having to pick a single candidate, could rank them in order of preference — and then have their preferences reallocated in runoffs, if necessary, until we got to the point where a winner had majority support?

Ranked-choice voting might sound radical. But consider that nearly a dozen U.S. cities, including San Francisco and Minneapolis, have been using it for years to elect local officials [source: FairVote]. And in a November 2016 referendum, Maine voters became the first in the U.S. to adopt ranked-choice voting for statewide races [source: Seelye].

"I think we essentially have a deep problem with plurality voting — it doesn't fit a multiple-options society," Rob Richie, executive director of the electoral reform group FairVote, told the Atlantic in 2016.

Proponents say ranked-choice voting would free Americans from the fear that they were wasting their votes on third-party candidates, and give major-party politicians a powerful incentive to reach out to more voters and listen to their concerns. Critics, in contrast, fear the new system would confuse voters and instead of raising turnout, depress it even more.

In this article, we'll look at how ranked-choice voting works, and whether it really would improve American politics. 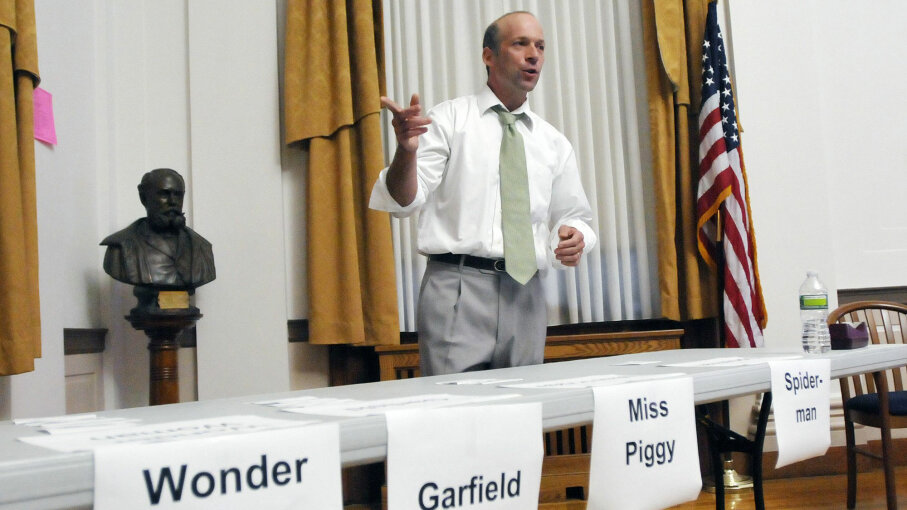 Maine, the first state to adopt ranked-choice voting, has long been faced with a difficult problem at the polls. Because third-party candidates often have attracted significant support, nine of the state's past 11 governors have been elected with less than 50 percent of the vote, and five have won with less than 40 percent. When current Maine Gov. Paul LePage, a Republican, ran against an independent and a Democratic opponent in 2014, he managed to win, even though just 38 percent of the voters backed him [source: Grabar].

We've seen similar things happen in presidential elections. In 2000, the 97,488 voters who supported Green Party candidate Ralph Nader in Florida may have enabled Republican George W. Bush to win the state by 48.847 percent to 48.838 percent over Democrat Al Gore and claim the presidency, even though Gore won the popular vote nationwide [sources: Orman, Scher].

A ranked-choice election system is designed to prevent such outcomes. Instead of picking a single candidate, voters rank all the candidates in order of preference. When the ballots are counted, if one of the contenders gets a majority of top rankings, then we'd have a winner.

But if nobody gets over 50 percent, a runoff process would kick in. The candidate with the least No.1 votes would be eliminated, and his or her voters would be reallocated to one of the others, based on their second preferences. If that still didn't give the top candidate more than 50 percent, then the new candidate with the lowest vote total would be eliminated and his or her votes distributed to the rest. The runoffs would continue until one candidate obtained a majority. That's why ranked-choice voting is sometimes called instant runoff voting. The voters don't have to return the polls a second time for a runoff [source: Mercer].

Ranked-choice elections are a bit more complicated than conventional ones, and they require special software to tabulate the rankings and conduct the runoffs [source: FairVote]. Filling out the ballot is more complex too. But what the system really would change is how election campaigns are conducted.

How Ranked-choice Elections Could Change Politics 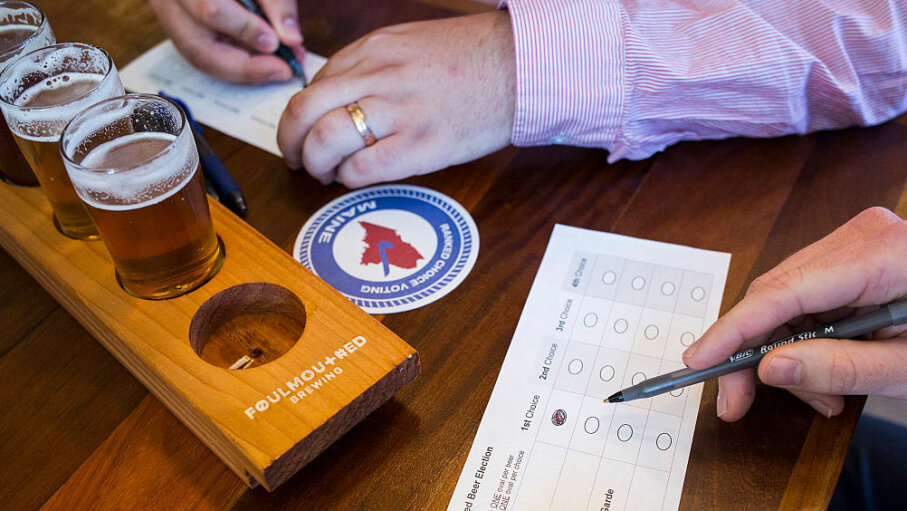 Finn Melanson, a volunteer with The League of Women Voters, ranks his beer choice in a demonstration at Foulmouthed Brewing in Portland, Maine, put on by the Committee for Ranked Choice Voting. Brianna Soukup/Portland Press Herald via Getty Images

The idea of ranked-choice elections dates back to the early 1800s, when British political reformers proposed it as a way to make elections more accurately reflect the leanings of the populace, and prevent anyone's vote from being wasted [source: Poundstone]. In the early 20th century, it was tried for a time in local elections in various U.S. cities. In New York City, it was used for the first time in the 1937 city council election, where it resulted in a dramatic political shift, taking away seats from the dominant Democratic party and allowing several minor party candidates — including a communist — to win seats. That rankled the political power structure, and a decade later, opponents, partly by appealing to voters' Cold War fears, managed to get it repealed [source: FairVote].

Since then, though, ranked-choice voting has made a modest comeback at the local level across the U.S. It also has been adopted in countries such as Australia, where it's used today to elect members of the House of Representatives [source: Owen].

In some places, ranked-choice voting has significantly altered the strategy of political campaigns, and produced surprising outcomes. When the city of Oakland, Calif. first used ranked-choice voting for its 2010 mayoral election, for example, 10 candidates were on the ballot, and a front-runner Don Perata got 35 percent of the first-choice vote. But that wasn't enough for him to win. Jean Quan, who finished way behind Perata on the initial round with 24 percent of first-preference votes, deftly had aligned herself with other longshot candidates against Perata, and won a lot of second-place votes. After the elimination rounds, she ended up on top, winning 51 percent support to Perata's 48 percent [source: Green].

Bloomberg View columnist Leonid Bershidsky has speculated that if the Republicans had utilized ranked-choice voting in the 2016 Presidential primaries, Donald J. Trump might not have won the nomination — or the presidency. "Traditional Republicans" who supported Jeb Bush, John Kasich and others wouldn't have picked Trump as their second choice, he wrote in 2016.

University of Iowa political science professor Caroline Tolbert, who's surveyed voters in cities with ranked-choice voting, has found that they perceive campaigns as less negative. When candidates have to reach out to a broader audience to get second or third-preference votes, she told Governing magazine in 2016, "it changes the dynamic from a zero-sum game."

Would Ranked-choice Elections Really Be Better?

Would ranked-choice elections reduce Americans' negative view of politics, or at least produce electoral results that voters would be happier with? Those are harder questions to answer. It's worth noting that Jean Quan, the Oakland mayor who was elected in part due to ranked-choice, ended up getting soundly beaten when she ran for re-election four years later [source: East Bay Times].

Critics say that ranked-choice elections have their downsides. For example, they're more time-consuming and complicated to conduct, especially in races where there are a lot of contenders on the ballot. In one 2010 district supervisor race in San Francisco, for example, it took 18 rounds for electoral officials to come up with a winner [source: Hedin]. And some fear that in state such as Maine, where half of the communities count ballots by hand, adding up all those preferences over multiple rounds will lead to more mistakes by election officials [source: Seelye].

Another problem: Since voters have to rank multiple candidates in various races, they sometimes find it confusing and give up without completing the ballot, so that their votes don't count past the first round. Also, many American cities limit the voters' ranking to their top three candidates. So it's possible that if all three candidates on a voter's list are eliminated (a process called ballot exhaustion) then the voter's ballot would be excluded from the final total. A study published in Electoral Studies in 2015 found that in four cities, between 9.6 and 27.1 percent of voters were eliminated due to ballot exhaustion [source: Burnett and Kogan].

In fact, some argue that ranked-choice voting actually results in fewer people participating in elections, instead of more. San Francisco State University political science professor Jason McDaniel, who studied voter participation in five San Francisco mayoral elections, found that it decreased among younger voters, African-Americans and those with lower levels of education after ranked-choice voting was adopted. This confirmed previous research that showed the more complex voting was, the lower the participation level [source: McDaniel].

Though I've covered politics as a magazine reporter, I'd never heard of ranked-choice voting before this assignment, which made it more interesting to me.