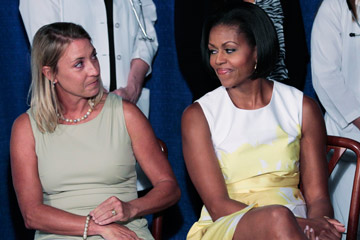 "An ounce of prevention is worth a pound of cure," according to Benjamin Franklin, and you don't need to be a kite- flying genius to understand the truth of that statement. When you get the flu, it's easy to lament all the things you could have done to avoid turning into a sniffling, coughing mess -- a flu shot, more frequent hand-washing, avoiding the seat on the bus next to the man hacking up a lung -- but too often, we ignore the precautions and pay the price.

In the United States, we've been paying a high price for avoiding Ben Franklin's advice. Chronic diseases such as heart disease and diabetes account for 75 percent of the country's health care costs. These diseases also cause 7 in 10 American deaths. Such a steep financial and emotional charge is particularly heartbreaking when you consider that many chronic diseases are preventable.

Too often, we use our health insurance only when we get sick. A man may see a doctor when he has a heart attack, incurring sky-high medical bills, but had that same man made an appointment years earlier, he may have learned about exercising, changing his diet and quitting smoking -- factors that could have prevented his heart attack in the first place. But preventive care has not been high on Americans' list of priorities; in fact, the White House estimates that we use preventive services at half the recommended rate. When you break down that statistic, it includes everything from the 12 percent of children who have not had a doctor's visit in the past year to the 33 percent of women aged 40 or older who haven't had a mammogram in the past two years [source: U.S. Department of Health and Human Services].

Why are we so reluctant to take care of ourselves? For one thing, it can be difficult to make yourself go to the doctor when everything's fine, and for another, doctor's visits are expensive. Regular appointments would be out of the question for someone without insurance, and even those with insurance may have needed the 20 dollar co-pay for that week's groceries.

The Affordable Care Act, the health care reform legislation passed in March 2010, aims to address that second obstacle. Though Americans will still have to take responsibility for making doctor's appointments and heeding medical advice, the financial burden will be removed for many people. Read on to find out how you can receive obesity counseling, Pap smears and well-baby visits at no out-of-pocket cost.