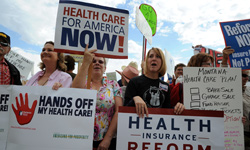 In 2008, the Harvard School of Public Health and Harris Interactive conducted a survey that asked U.S. citizens whether their country had the best health care system in the world. Overall, 45 percent of the respondents believed that the U.S. did in fact have the best system, but when the results were broken down by political party affiliation, the differences were stark. Sixty-eight percent of Republicans claimed U.S. superiority, compared to only 32 percent of Democrats. More than half of Democrats -- 52 percent -- believed that other countries had better health care systems, a belief shared by only 19 percent of Republicans (the remainder of participants claimed not to know). Participants from both parties admitted that the U.S. was particularly weak in factors like making sure everyone had affordable health care and controlling health care costs [source: Harvard School of Public Health].

In the contentious debate about health care reform, the U.S. system is often compared to other systems around the world. Some are concerned that the U.S. spends twice as much per person, while others are willing to pay that price to have choice of providers and shorter waiting times. Myths abound about what health care is actually like in other countries, so let's go around the world and see for ourselves.