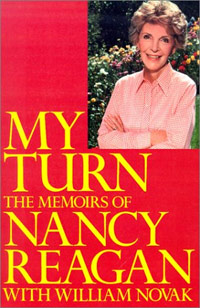 In writing her memoirs, Mrs. Ronald Reagan utilized the diary she kept while residing in the White House. The story opens on March 30, 1981, the day her husband -- President Ronald Reagan -- was shot. From there it meanders back and forth through time, covering an array of subjects, including her much criticized dependence on astrology and her relationship with San Francisco astrologer Joan Quigley:

When Joan got back to me with her advice on specific dates, I would, if necessary, call Michael Deaver, who was in charge of Ronnie's schedule. Sometimes a small change was made ... While astrology was a factor in determining Ronnie's schedule, it was never the only one, and no political decision was ever based on it.

Mrs. Reagan touches on a host of other topics, including:

Shortly after its release, Hillary Clinton's memoir, "Living History," was making and breaking all sorts of publishing records. The book's sales were so high within the first week alone that the publisher managed to earn back the almost $3 million advance (and then some) it had paid Clinton.

There were several things driving the first round of sales of "Living History" -- specifically, certain elements of controversy surrounding the Clintons' time in the White House and talk about a possible run for the presidency by the former first lady. With her husband's memoir hitting the shelves, it's highly likely that her book will enjoy a another surge of popularity.

For more information on presidential memoirs and related topics, check out the links on the following page.

My eight years in the White House tested my faith and political beliefs, my marriage, and our nation's Constitution. I became a lightning rod for political and ideological battles waged over America's future and a magnet for feelings, good and bad, about women's choices and roles. This book is the story of how I experienced those eight years as first lady and the wife of the president.

These are some sources that we found useful in researching this article: