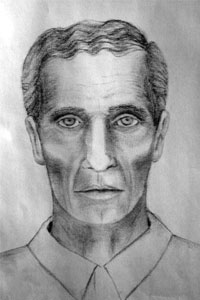 Facial composite of the man suspected of kidnapping Elizabeth Smart in 2003.
Getty Images

Drawing a police sketch by hand clearly requires a degree of artist talent, but it doesn't necessarily demand a degree from art school. Depending on the size of the police department, forensic artists may or may not be full-time employees. In small-town departments, a patrol officer with a knack for drawing may actually volunteer for the role, while larger, better-funded agencies may employ civilians formally trained at the FBI's forensic facial imaging laboratory or other forensic art training programs [source: Echaore-McDavid and McDavid].

The police sketching process also varies by forensic artist. For instance, former NYPD forensic artist Stephen Manusci takes the old school pencil and paper route, refining the face as needed with input from victims or eyewitnesses [source: Lichtman]. Roderick Scratchard, forensic artist with the Philadelphia Police Department, takes the opposite route. First, he creates a computer-generated composite based on photos of faces and features that interviewees have selected. Then, he draws the final police sketch by hand based on that computer composite, tweaking the appearance as requested [source: Avril].

Computers have played a role in police sketches since the 1960s, with the arrival of the identi-Kit composite software. Police departments without the resources to retain a bona fide forensic artist could instead purchase identi-Kit -- and now a host of other programs -- to automatically generate facial composites by selecting from a gallery of profiles and traits. Reliance on computers has proven controversial, however, as studies have shown that hand-drawn police sketches often turn out more accurately than computer-only composites [source: Avril]. Newer programs do a better job at producing more nuanced mug shots. Hearkening back to Bertillon's cross-indexing to pinpoint repeat offenders, a computer program developed at Michigan State University in 2011 digitally analyzes hand-drawn composites and compares them to photographed mug shots stored in law enforcement databases. Due to high recidivism rates, the highly publicized technology could help officers identify suspects more quickly. Nevertheless, the FBI isn't impressed by any technological advances. Due to the anecdotal accuracy, when it comes to the paper versus computer quandary, hand drawn composites are a must-have in the agency's book [source: FBI].

But whether a facial composite is drawn by a person or a computer, the question of whether it looks anything like the person who committed the crime remains sketchy.

More Than Just a Well-drawn Face

Sketching faces of criminals on the run isn't the only task forensic artists tackle. Their subjects aren't even limited to criminals. Here's a little sample of some other types of forensic art: