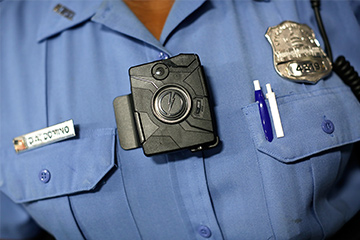 Police body cameras are often "point-of-view cameras." They mount to a hat, helmet or pair of sunglasses, recording what an officer actually sees as he goes about his job. Others mount to the shoulder or collar of a uniform and record from a slightly lower perspective. Most are roughly the size of a Scotch tape dispenser and weigh anywhere from about 2 ounces (55 grams) to 5 ounces (140 grams) [source: NLECTC]. That's somewhere between a large strawberry and a lemon.

Beyond that, features vary by model. There are more than a dozen to choose from, made by companies like Taser, Vievu, Wolfcom and Panasonic. Extras include high-definition video, wireless operation, anti-tampering safeguards, one-touch activation, ultra-wide-angle views, auto-adjusting low-light modes and night vision [source: NLECTC]. (Night vision isn't all that useful in the accountability context, though, since what matters is what the officer could see, not what was there [source: Wolfcom].)

One of the most impressive features, though, is battery life. Recording times can reach 12 hours or beyond. Twelve hours is a police shift [sources: Crisp, Wolfcom].

Most officers don't record their entire shifts, though. To save power and avoid wasting storage space on lunch breaks and driving, they typically start recording when they're about to interact with civilians. Lest this result in missing something significant, most models have buffering systems, or "pre-record." As long as the camera is turned on, it's recording, but only in 30-second (or 60-second) intervals and usually without audio [source: NLECTC]. After 30 seconds, it deletes that footage and records another 30 seconds, and so on, until the officer hits "record." At that point, audio activates and everything gets saved, including the previous 30 seconds of buffered footage. Pre-record footage can add valuable contextual information, or it could prove critical if an officer hits the "record" button late due to the urgency of the situation [source: Wells].

All of this functionality comes at a price. The cameras run from about $130 to $900 apiece, which may seem unimpressive considering the price of a civilian-issue smartphone. But if you are, say, the Oakland Police Department, and you're deploying 600 of them (and watching your use-of-force complaints drop by 75 percent over five years), it adds up [source: Brown].

GoPro started selling its wrist-strapped, waterproof camera to surfers, snowboarders and other active types in 2005 [source: Mac]. Ten years later, we can watch the ground rise as if falling from 10,000 feet (3,048 meters); see into the mouth of an attacking rattlesnake; watch a baseball hurtling toward us at 97 mph (156 kph); and discover what it looks like when some guy in Argentina tries to mug you at gunpoint — all without jumping from a plane, getting anywhere near a rattlesnake, making it to the majors or having some jerk point a gun at us.