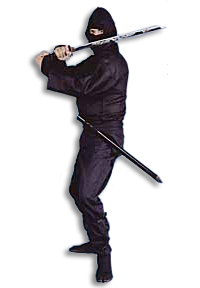 Ninja­ used a wide variety of weapons, as well as other specialized equipment to help them survive while alone on difficult missions.

A ninja's uniform is called a ninja-yoroi, or ninja armor. It consists of a black jacket, black trousers, light sandals, and a hooded cowl. Some ninja costumes included red accents along with the black, supposedly to hide any injuries the ninja might receive from his enemies. There is some evidence that ninja wore all white costumes in snowy conditions, but the multi-colored ninja seen in some action movies did not exist. A few ninja wore lightweight armor beneath their shirts.

Much of a ninja's work was not done while wearing his ninja-yoroi, however. If a ninja needed to gather information or get close to an assassination victim in a crowded place, wearing a black hood was not a good way to stay inconspicuous. The ninja were experts at hiding in plain sight, disguising themselves as priests, dancers, merchants, or farmers. They tried to look as plain and ordinary as possible.

A ninja usually wore a ninja-to or other short sword on his back. They also used shuko, weapons worn on the hand (similar to brass knuckles), or tiger claws, which were sharp blades on the palm of the hand which may have been just as effective for climbing as for hand-to-hand combat.

Ninja are famous for using shuriken, or ninja throwing stars. These were often small knives or daggers in addition to the well-known star shapes. The stars were very inaccurate, and were usually used as a delaying weapon if a ninja were being chased. Although they had little chance of striking, seeing a sharp metal blade come flying out of the darkness at his face would likely make even the toughest of pursuers hesitate.

­A wide variety of other weapons were used by ninja, including short knives, roped weapons for entangling a foe or striking from a distance, and weapons mounted on long bamboo poles. Some ninja may have used poison on their bladed weapons, though the murky historical records make it difficult to tell if this is true.

Other useful ninja gear included rope ladders with hooks on the ends for throwing up onto walls; small sharp tacks called caltrops that could be left on the ground for enemies to step on (particularly useful in Japan, where most people wore light straw sandals at most); small, one-person boats that could be folded down to a portable size; smoke bombs; blow guns; short hollow tubes for breathing under water; and special healing herbs in case the ninja was injured while on a mission.