Changes in the Digital Age 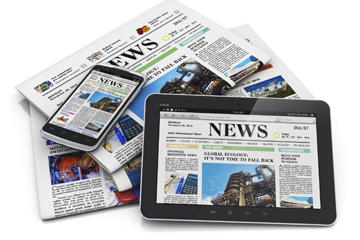 It has been clear for some time that newspapers would have to make adjustments in order to survive in an increasingly digital age. A significant online-news presence is a must. A focus on online advertising is a must. Additional online offerings like newsletters and custom content are a must. Some newspapers have generated extra revenue by helping local businesses market their products and using their delivery resources to transport products for others [source: Newspaper Association of America].

It's a shift that has been underway for years. Most newspapers now have online editions. Subscription models have gone beyond print-only into digital-only and print-digital combinations -- and as print-only circulation is dropping, digital and combination circulation is on the rise. As print-advertising revenue continues to decline, digital-advertising revenue continues to grow, though not enough yet to make up for the shortfall [source: Newspaper Association of America].

Many newspapers with online editions – almost one-third of those in the U.S., in fact -- are experimenting with a departure from traditional ad-based revenue in favor of paywalls, or charging for online content [source: Lazaroff]. Some require subscriptions for all content, while others limit access to specific types, such as investigative journalism or limit your free access to maybe 10 articles per month. Behind the paywall, the usual third-party ads are eliminated, though ads sourced through a newspaper's own channels may still appear [source: Sweeney]. Results have been mixed. Some papers with paywalls have experienced massive drops in readership, while others have grown their online subscriptions enough to counter at least some of the decline in traditional advertising revenue [sources: Sweeney, Lazaroff].

What all of this means to the future of the newspaper industry remains to be seen, but it's clear a major transition is happening. The financial struggles and ultimate sale in 2013 of The Washington Post, one of the most prestigious newspapers in the U.S., highlights the difficulty in changing a newspaper culture that has remained fairly static for centuries. There are those who predict the obsolescence of the medium. For many news consumers, though, the professional, reliable and experienced reporting offered by traditional newspapers, even as they expand into nontraditional realms, is unchallenged by new, loosely monitored online organizations whose commitments to the facts have not yet been proved. To those consumers, obsolescence is out of the question.