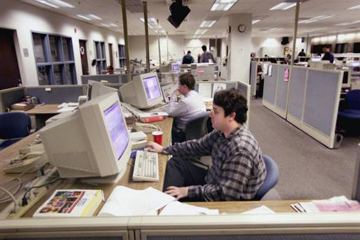 Curiously, for a publication called a newspaper, no one has ever coined a standard definition of news. But for the most part, news usually falls under one broad classification -- the abnormal. It is human folly, mechanical failures and natural disasters that often "make the news."

Reporters are a newspaper's front-line eyes and ears. Reporters glean information from many sources, some public, such as police records, and others private, such as a government informant. Occasionally, a reporter will go to jail rather than reveal the name of a confidential source for a news story. American newspapers proudly consider themselves the fourth branch of government -- the watchdog branch -- that exposes legislative, executive and judicial misbehavior.

Some reporters are assigned to beats, or an area of coverage, such as the courts, city hall, education, business, medicine and so forth. Others are called general assignment reporters, which means they are on call for a variety of stories such as accidents, civic events and human-interest stories. Depending on a newspaper's needs during the daily news cycle, seasoned reporters easily shift between beat and general-assignment work.

In the movies, reporters have exciting, frenzied and dangerous jobs as they live a famous pronouncement of the newspaper business: "Comfort the afflicted and afflict the comfortable." Although a few members of the media have been killed as a result of investigations into wrongdoing, newspaper work for the great majority of reporters is routine. They are our chroniclers of daily life, sorting, sifting and bringing a sense of order to a disorderly world.

All reporters are ultimately responsible to an editor. Depending on its size, a newspaper may have numerous editors, beginning with an executive editor responsible for the news division. Immediately below the executive editor is the managing editor, the person who oversees the day-to-day work of the news division. Other editors -- sports, photo, state, national, features and obituary, for example -- may also report to the managing editor.

However, the best known and in some ways the most crucial editor is the city or metro editor. This is the editor that most reporters work for directly. The city or metro editor assigns stories, enforces deadlines and is among the first to see reporters' raw copy. Underneath the city or metro editor are other editors who report directly to him or her.These editors are called gatekeepers, because they control much of what will and will not appear in the next day's paper. Often working under the stress of breaking news, their decisions translate directly into the content of the newspaper.

Once an editor has finished editing a reporter's raw copy, the story moves to another part of the news division, the copy desk. Here, copy editors check for spelling and other errors of usage. They may also look for "holes" in the story that would confuse readers or leave their questions unanswered. If necessary, copy editors may check facts in the newspaper's library, which maintains a large collection of both digital and print reference materials, including past newspaper issues.

The copy-desk chief routes finished stories to other editors who fit local and wire service stories, headlines (written by the editor, not the reporter!) and digital photographs onto pages. Most newspapers do this work, called pagination, with personal computers using software available at any office supply store.

Before we see what happens to the electronic pages built by the copy desk, it will be helpful to understand how other divisions of a newspaper contribute to the production cycle.