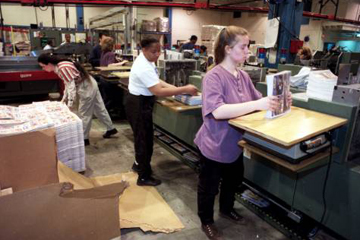 Newspaper distributors pick up their bundles at The Herald-Sun in the early hours of the morning.
Photo courtesy of the The Herald-Sun

Responsibility for getting the newspaper from the press to the reader falls to the distribution division. Large newspapers may publish multiple editions per day, all of which must be ready to leave the newspaper plant at a certain time. The first edition, sometimes called the bulldog edition, goes to the outer limits of the newspaper's circulation area. This may be several counties or even an entire state. Later editions contain progressively fresher news and go to smaller areas. The final edition, which goes to press after midnight, contains the latest news but covers the smallest geographical area, usually a city.

Any subscriber to a daily newspaper knows that it plops onto the driveway in the wee hours of the morning. Independent contractors called carriers buy copies of the newspaper at a discount and deliver them, using their personal vehicles [source: News-Gazette].

Because a newspaper's circulation, the number of people who receive the paper, has a substantial impact on its advertising rates, an independent agency called the Alliance of Audited Media examines and certifies circulation numbers. This assures both the advertising division and advertisers that circulation claims are valid.

In 18 hours of highly coordinated work carried out by numerous divisions, what newspaper people call a "rough draft of history" has moved through computer systems, imaging machines and presses that would amaze Gutenberg, to its final destination -- the readers.

Those readers once comprised pretty much anyone hungry for news and information. Then came TV, and some of those readers starting tuning in instead of flipping pages. And in the 21st century, newspapers face what is likely their biggest challenge yet: the digital revolution.

How to survive and even flourish in a culture more attuned to electronic media than to printer's ink is an issue the newspaper industry has been dealing with for years, with varying degrees of success.