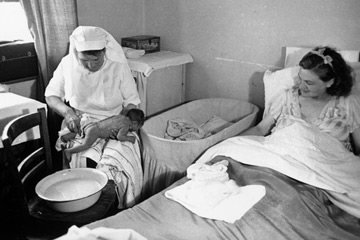 A midwife tends to the baby after a home birth in the 1940s.
Merlyn Severn/Stringer/Hulton Archive/Getty Images

About 99 percent of all U.S. births occur in a hospital, but each year, approximately 25,000 women decide to deliver in their own homes [source: Elton]. Women who deliver at home cite the argument made earlier in this article about childbirth becoming too much of a medical procedure; these women claim to be more comfortable in their own beds, with their own things, having a baby on their own terms. These women usually elect to have a midwife in attendance.

In many countries around the world, home births aren't a big deal. In the U.S., however, organizations such as the American Medical Association (AMA) and the American Congress of Obstetricians and Midwives (ACOM) have spoken out against the practice. Midwives claim that with low-risk pregnancies, a home birth is just as safe as a hospital birth, while the medical organizations claim that if something were to go wrong, there'd be a critical window of just a few minutes to perform a surgical procedure or provide advanced medical care. If a midwife had to drive a distressed laboring woman to the hospital, that window might close before the woman could receive care.

Studies support both sides of the issue in this case; some studies find planned home births safe, while others find that fatalities can happen. Doctors and certified nurse-midwives, who are allowed by law to perform home births, usually prefer to work in a hospital or birthing center, so home births are normally performed by direct-entry midwives. The relationship between a direct-entry midwife and an obstetrician can be tenuous at best. If a direct-entry midwife needs to bring a pregnant woman to the hospital, an on-call obstetrician may resent having to oversee a high-risk delivery already in progress (as opposed to monitoring a woman throughout the labor). Some midwives may wait too long to bring the woman to the hospital -- direct-entry midwives aren't allowed to perform home births legally in some states, so they face arrest for showing up with a woman in distress. Some states are considering changing the laws to crack down on home births, but some states, recognizing that legal prohibition might push the practice further underground, are trying to pass laws that allow midwives to bring women to a hospital without legal repercussions.

To some critics, the battle over where a woman will deliver is nothing but a turf war based on economics -- using a midwife can be far cheaper than using an obstetrician, and more insurance companies are starting to cover midwifery services. But even if such controversies didn't exist -- and even if a woman wanted to give birth in a hospital -- she'd still need to ask potential midwives lots of questions about training, experience, certification, backup obstetricians and childbirth philosophies (some women set on a natural childbirth may change their minds halfway through and ask for an epidural, only to be told no by the midwife). If finding a midwife and preparing for other aspects of childbirth is on your mind, then go on to the next page, where there are lots of links that can help you out in your search.