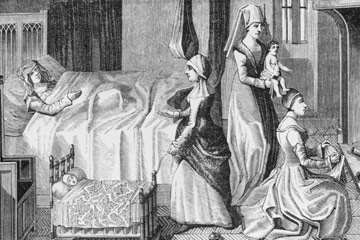 This engraving from the 1400s shows midwives attending at a birth.
Hulton Archive/Stringer/Getty Images

Midwife comes from an old English word meaning "with woman," and since women have been the traditional birth attendants throughout history, midwives have existed for as long as babies have been born. There are references to midwives in ancient Greek and Roman texts, and midwives are mentioned in the Bible. Knowledge about midwifery passed from woman to woman, and new midwives were made by apprenticing at an experienced elder's side.

When medical knowledge was scant, however, midwives were often blamed if something went wrong with a woman's pregnancy or a baby's delivery. From the 1400s to the 1600s, midwives in Europe ran the risk of being accused of witchcraft. The 1484 "Malleus Maleficarum," a famous book about witches, claimed that midwives were the most dangerous kind of witch for all the damage they could do to a new family.

As medical knowledge developed, movements began to teach and train midwives. In 1902, Great Britain set up a Central Midwives Board to train, license and regulate midwives, which gave midwifery a sense of professionalism that's common in Europe. At the same time, though, sentiment was moving the opposite direction in the U.S. Obstetrics became a widespread medical practice, and the physicians, perhaps motivated by economic concerns, waged a public relations war against midwives. Doctors showed that with their up-to-date knowledge about medicine, hygiene and surgical options in the event of an emergency, they had better birth outcomes. In 1926, a prominent doctor wrote that midwives were "filthy and ignorant," and going to the hospital to give birth became the thing to do if a family could afford it.

There was one notable exception during these dark days for American midwives. In the early 1920s, a wealthy woman named Mary Breckinridge became concerned that poor, rural women in her home state of Kentucky didn't have access to good medical care. She traveled to Britain, trained as a midwife and founded the Frontier Nursing Service (FNS) in Kentucky. Breckinridge and her midwives kept meticulous records, and they were able to show that they had lower instances of death among mothers and babies compared to doctors, which was particularly remarkable considering that she served poor women.

In the 1960s and '70s, U.S. women became interested in natural birth again. Some women shared horror stories of demonic doctors and traumatic hospital experiences, while others were caught up in the counterculture movement that shunned mainstream institutions like modern medicine. In 1977, Ina May Gaskin, a self-trained midwife, published "Spiritual Midwifery," an underground classic that urged women to take childbirth back from doctors and enjoy every minute of it. Women flocked to Gaskin's commune, the Farm, to train with her, and word spread that childbirth didn't have to be a medical procedure.

At first, using a midwife for childbirth was something that hippies did, but it's becoming more and more mainstream every year. We'll take a look at some modern types of midwives on the next page.