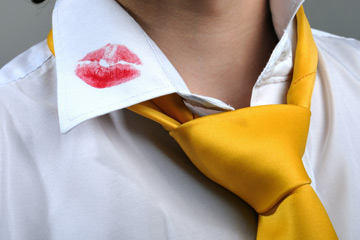 Not your lipstick on his collar? Uh-oh.
© 2009 Jupiterimages Corporation

When we learn of an affair, we may ask, "What went wrong?" The answer, according to some researchers, could be "nothing." In a study published in 2008 in the Journal of Marriage and Family, couples were asked to define their marriages as "very happy," "pretty happy" or "not too happy." Those in not too happy marriages were three times more likely than those in very happy marriages to report an affair, but surprisingly, couples in pretty happy marriages were twice as likely as those in very happy marriages to have had an affair [source: Jayson]. How happy is happy enough? Researchers and therapists wonder if we put too much pressure on the institution of marriage, if we expect a relationship to always be at its peak in terms of romance and companionship, despite developments such as children or a rough economy. When men and women perceive a dip or feel bored, they immediately throw a "pretty happy" relationship away.

There are a few studies which indicate that women are more attuned to small problems within the relationship that spell doom, and that's why they pursue affairs. A 2008 study found that half of women reported marital problems before an affair, while only a quarter of men reported problems [source: Jayson]. And a 2007 study published in the journal Sex Roles found that women are much more likely than men to begin a new relationship with the person they cheated with, perhaps indicating that women use affairs as a way to end stagnant relationships and find new, better mates [source: Brand et al.]. Men, the study reports, were more likely to cite "saw an opportunity and took it" as a reason for committing adultery than women were, while the women cited reasons that had to do with the demise of the relationship.

That opportunity that men cite, as opposed to happiness, may be the key factor to whether infidelity takes place. The rates of women committing adultery has been on the rise in recent years, a phenomenon researchers attribute to their increased presence in the workplace and in jobs that require them to travel. One University of Maryland professor believes that certain powerful professionals will always have the opportunity, because they have the status and wealth that attracts attention; according to him, infidelity magnets include athlete, pilot, lawyer, doctor and anyone with a measure of fame [source: Stoller].

And married men may always get a larger share of opportunity from single women, if a 2009 study from the Journal of Experimental Social Psychology is any indication. In that study, single women were shown a picture of a man and were told that a computer had rendered him a compatible match. When the women were told that the man was single, 59 percent of the single women were interested in meeting the man. The other half of the single subjects were told that the man was in a committed relationship; 90 percent of those women were interested in pursuing the man [source: Tierney]. Researchers theorize that the men in relationships have been pre-screened and deemed acceptable as a mate, while the unattached men are greater unknowns. For men in the study, a status of single or attached made no difference in whether they wanted to pursue their computer-generated match.