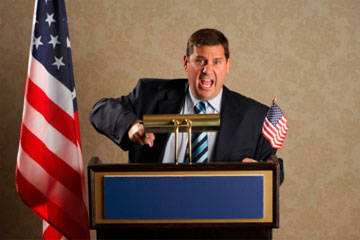 Want to avoid losing face in a public debate? You could sign an MOU with your opponent that basically scripts the debate, like John Kerry and George W. Bush did.
Jupiterimages/©Getty Images/Thinkstock

So, say you're a United States presidential candidate preparing for an upcoming debate, but you really don't want to answer or ask any substantial questions. No problem. Just have your lawyers draw up an MOU that outlines a framework for a staged debate.

One of the most famous examples of this happened in 2004, as George W. Bush and John Kerry campaigned for office. Both parties agreed to a 32-page MOU, which controlled many aspects of the debate and let them better manage their public personas.

But not all politicians use MOUs to evade off-the-cuff debate questions; some employ them to prevent war. In 1972, President Richard Nixon and the Soviet Union agreed on an MOU that created a direct telecommunications link between the two sides, with the intent that this system could prevent misunderstandings that might lead to nuclear war.

In 1997, the Clinton administration composed an MOU to update the 1972 Anti-Ballistic Missile Systems Treaty to reflect changes that occurred as the former USSR dissolved into several successor states. This MOU came at a critical juncture, when the world was worried about the security of the former USSR's nuclear stockpile.

In spite of their popularity, MOUs do occasionally draw criticism. In 2008, the U.S. Immigration and Customs Enforcement (ICE) launched a program called Secure Communities, which is designed to help state and local law enforcement personnel identify criminal illegal aliens and deport them.

ICE signed MOUs (often called memoranda of agreement in these instances) with local law enforcement agencies around the country to gain their cooperation. But the agreements came under fire from critics, who called the program a plan to ferret out and deport all illegal immigrants, including those deemed noncriminals.

MOUs play a big role in social issues around the world. The United Kingdom signed an MOU in 2005 to humanely deport unwelcome Nigerians who overstayed their visas or failed to gain asylum. The agreement included terms for safe escort by Nigerian authorities. In other cases, MOUs help people in a quandary. In 2011, Kenya signed an MOU with the United Nations to address the condition of refugee camps within its borders. The document specified security measures and means for delivering goods and services to the impoverished people in the camps.

All of these examples demonstrate how important MOUs have become for business, government and political purposes. And, no matter whether you deem their purposes nefarious or inspiring, MOUs are an established form of written communication that provides a powerful means for pushing through on important business projects, beating deadlines and implementing governmental polices all over the world.