Are We Alone in Love? 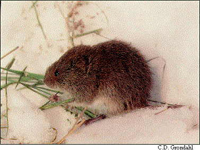 Only three percent of mammals (aside from the human species) form "family" relationships like we do. The prairie vole is one such animal. This vole mates for life and prefers spending time with its mate over spending time with any other voles. Voles even go to the extreme of avoiding voles of the opposite sex.

When they have offspring, the couple works together to care for them. They spend hours grooming each other and just hanging out together. Studies have been done to try to determine the chemical makeup that might explain why the prairie vole forms this lifelong, monogamous relationship when its very close relative, the montane vole, does not.

According to studies by Larry Young, a social attachment researcher at Emory University, what happens is that when the prairie vole mates, like humans, the hormones oxytocin and vasopressin are released. Because the prairie vole has the needed receptors in its brain for these hormones in the regions responsible for reward and reinforcement, it forms a bond with its mate. That bond is for that particular vole based on its smell -- sort of like an imprint. As further reinforcement, dopamine is also released in the brain's reward center when they have sex, making the experience enjoyable and ensuring that they want to do it again. And because of the oxytocin and vasopressin, they want to have sex with the same vole.

Because the montane vole does not have receptors for oxytocin or vasopressin in its brain, those chemicals have no effect, and they continue with their one-night stands. Other than those receptors, the two vole species are almost entirely the same in their physical makeup.