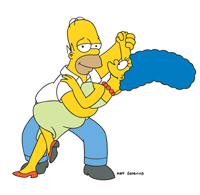 Homer and Marge of "The Simpsons" stay together week after week.
©2002 FOX BROADCASTING

What about when that euphoric feeling is gone? According to Ted Huston at the University of Texas, the speed at which courtship progresses often determines the ultimate success of the relationship. What they found was that the longer the courtship, the stronger the long-term relationship.

The feelings of passionate love, however, do lose their strength over time. Studies have shown that passionate love fades quickly and is nearly gone after two or three years. The chemicals responsible for "that lovin' feeling" (adrenaline, dopamine, norepinephrine, phenylethylamine, etc.) dwindle. Suddenly your lover has faults. Why has he or she changed, you may wonder. Actually, your partner probably hasn't changed at all; it's just that you're now able to see him or her rationally, rather than through the blinding hormones of infatuation and passionate love. At this stage, the relationship is either strong enough to endure, or the relationship ends.

If the relationship can advance, then other chemicals kick in. Endorphins, for example, are still providing a sense of well-being and security. Additionally, oxytocin is still released when you're having sex, producing feelings of satisfaction and attachment. Vasopressin also continues to play a role in attachment.