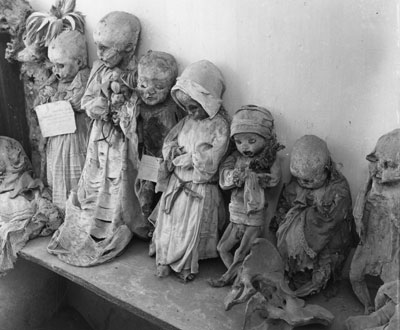 A 1955 photo of some of the infant mummies exhumed from Panteon cemetery in Guanajuato, Mexico.
George Pickow/Three Lions/Getty Images

There are a few techniques wherein human remains can become preserved. One, of course, is mummification. In this method, pioneered by the pharaonic Egyptians, internal organs are carefully removed and body cavities are filled with herbs and other natural materials that combat decay. The body is then bathed in oils and wrapped tightly in linen. The mummified remains of Egypt's early dynastic rulers can be found intact and on display around the world today, thousands of years after their deaths.

While it sounds like a tedious process, mummification can also happen accidentally. In the 19th century, it was customary for the dead to remain interred for five years before being exhumed and cremated. And in 1865, when the first residents of Guanajuato, Mexico, were exhumed, the town was in for a surprise. Undertakers discovered that unembalmed corpses buried in the town graveyard weren't decomposing -- they were mummified. The salty, dry soil in the graveyard is responsible for the mummies now on display at the famous museum in town [source: Ball]. Another case of an incidental mummy is the Tollund Man, a 2,000-year-old prehistoric man. He was hanged in Denmark, and in 1950, his body was discovered -- remarkably preserved from the peat bog into which it had been dumped. Even his fine hair and beard are intact [source: Silkeborg Public Library].

These examples of preserved humans share a common theme: Science can point to the means (either intentional or environmental) by which they were preserved. This is not the case for some of the incorruptibles found around the world -- their existence baffles scientists. While the preserved remains of mummies are generally found in states of rigor mortis-like petrifaction, incorruptible corpses are pretty pliable. Their skin is supple, even years after their deaths. They appear, for all intents and purposes, to be sleeping or only recently dead.

What's more, these corpses don't show signs of having been embalmed. And the local conditions don't appear to have had a preservative effect on them. While they remained in a perfect state of composition, other corpses interred nearby were degenerating like normal. Yet, some of these incorruptibles met violent ends or died from ravaging diseases that should have accelerated -- not deterred -- decomposition [source: Ferrari].

Because incorruptibility qualified as one of the prerequisites for sainthood, once a person became a candidate, he or she was disinterred for inspection. At these exhumations (which continued well into the 20th century), it was canonical policy to have representatives from the Church, physicians and secular citizens present in order to provide credibility to the findings. Many of those corpses who were found uncorrupted were sainted.

The downside to having an incorruptible corpse? You can't exactly rest in peace. Uncorrupted saints were -- and still are -- a big attraction for religious pilgrims looking to encounter evidence of the Holy Spirit firsthand. The only problem is there are a lot more Catholic parishes than there are incorruptible corpses. As a result, these inexplicably preserved saints were dismembered, and their body parts were sent to all reaches of the globe. A hand may have ended up at one church, while the heart and head may have been sent to others.

There are a number of saints who remain in one piece, though. They are usually displayed in reliquaries -- enclosed glass coffins -- generally on display in front of or behind a church's altar.

Read about some of these folks and the skepticism surrounding their corpses on the next page.