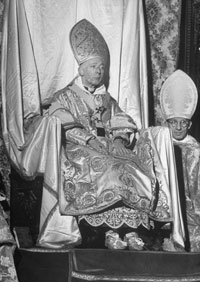 We tend to imagine our incorruptibles in a state of perfect preservation. In many cases, incorruptible saints have remained in such a state for decades. But the ravages of time eventually have an effect on a body -- even a saintly one. While some of the incorruptible saints have taken on a mummy-like appearance over the centuries, the fact that their bodies remain in one piece is something of a mystery. At the very least, it's difficult to explain.

Some cases of incorruptibility have been revealed as fraudulent. In other cases where incorruptibility actually did exist, it was further preserved later by embalming the corpse. In the 20th century, the Catholic Church discontinued the practice of using incorruptibility as a prerequisite for sainthood. The Church wasn't responding so much to the fraud of some cases, but to the cases in which incorruptible corpses didn't extol Catholic piety. Members of other religions have been discovered in uncorrupted states. And at least one case of incorruptibility was discovered in a person who clearly hadn't exactly lived a saintly life. Cardinal Shuster, an Italian archbishop, had been a fascist and friend of dictator Benito Mussolini. His corpse was found uncorrupted 31 years after his death [source: Fortean Times].

It's easy to dismiss a corpse that's been mummified as a fraudulent incorruptible. Other instances aren't as cut and dry. Saint Catherine of Bologna died in 1463 and was buried casketless in the ground. After a few weeks, she was dug up, showing no signs of decay. This didn't exactly convince anyone she was incorruptible, but the fact that she's been on display since 1500 suggests something pretty mysterious at work. She's seated in a chair among candles at the chapel of Poor Clares (a Catholic sisterhood she oversaw) in Bologna, and even though her skin is browned and her appearance is a little shriveled, her continued physical integration hasn't been explained by science.

Saint Silvan is another inexplicable incorruptible example, although some skeptics believe the body on display is a statue or wax figure. St. Silvan is on display at the Church of St. Blaise in Dubrovnik, Croatia. He was martyred in the 4th century. After nearly 1,700 years, his body remains intact. His eyebrows are still in place, and his curly hair remains lifelike. His skin has retained a remarkable amount of natural color, as have his lips.

Perhaps the most famous incorruptible is a young shepherdess, Saint Bernadette. She died at age 35, but achieved acclaim among Catholics for having been visited by the Virgin Mary. The Virgin instructed Bernadette to dig in a spot at Lourdes, France. A well sprung up and came to be regarded as a healing place.

Bernadette died in 1879 and was exhumed under candidacy of beatification in 1909. Her corpse was uncorrupted. She was reinterred in her crypt and dug up again in 1919 and 1923. Upon the third exhumation, she was dissected. Her organs were still soft and malleable [source: Fortean Times]. She was placed on display in a reliquary, where she remains today, at the convent of St. Gildard at Nevers, France.

Bernadette stands (or lies) as a sterling example of incorruptibility. But her corpse also provides ammunition for skeptics. Her hands and face appear incredibly lifelike, but this is due to a wax covering. Beneath the waxy exterior, her skin has browned. While there's no scientific explanation for why her body would have remained so well-preserved without the aid of embalming or environmental conditions, she shows that all bodies will eventually rot. Just how long that process takes, however, may depend on any number of factors.

For more information on corpses and other related topics, visit the next page.