Costs: Who pays what? 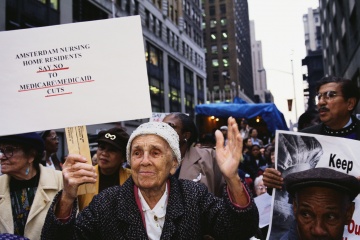 Medicaid’s funding has long been a hot-button political issue. In this 1995 photo, an elderly woman protests cuts to Medicare and Medicaid at a health care march and rally in New York City.
© Bettmann/CORBIS

Both state and federal governments are responsible for costs of state-run programs that have been approved by the U.S. Department of Health and Human Services. Funding used to pay physicians, hospitals and other health care and long-term care providers caring for Medicaid beneficiaries are paid for by the state. States may require that Medicaid beneficiaries share costs as well, and any state can require participants to pay out-of-pocket expenses for deductibles, co-payments or coinsurance among other charges (although there are exemptions for pregnant women and children).

During the first years of expanded Medicaid coverage, between 2014 through 2016, the federal government is responsible not only for its contribution to established (not expansion) Medicaid state programs but for 100 percent of the costs of the expansion as well. By 2020, federal funding will drop to a minimum of 90 percent coverage of the bill and each state will become responsible for the remaining costs of expanding its program. So if, for example, all 50 states implemented Medicaid expansion in 2014 under the Affordable Care Act, it's estimated that the total Medicaid costs (including insurance subsidies) would equal $1 trillion during the first 10 years under the expanded eligibility rules, a 16 percent increase from estimated Medicaid costs without expansion over the same period of time. No less than 90 percent (more than $900 billion) of that falls to the federal government, and the remaining is state responsibility [sources: KCMU, Rau].

Funding for individuals enrolled in Medicaid programs that are not part of the expansion program is covered by grants from both federal and state governments. The federal government matches every dollar a state spends on its own program -- at least, that's the minimum funding requirement. Exactly how much each state receives is determined by the Federal Medicaid Matching Rate (FMAP), which takes a state's overall wealth into consideration. In 2011 the total costs covered by state and federal funding was an estimated $414 billion, and, on average, the federal grants to states covers about 57 percent of costs [source: CBPP].

About 4 percent of Medicaid expenses are for what are called disproportionate share hospital (DSH) payments -- states make DSH payments to cover any health care costs hospitals incur when they treat a high volume of Medicaid patients or incur a high volume of costs providing services to underserved areas and uninsured patients.

One fact I learned while discovering the ins and outs of our public health care system is this: Every year, 45,000 Americans die because they couldn't afford the care they needed to get well -- and to put that number into perspective, that's as many as 5 people dying every hour from something that could have been prevented or treated.