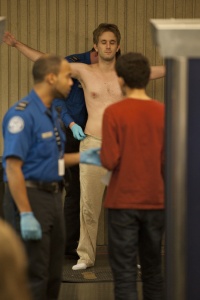 The TSA conducts a screening at Logan International Airport in Boston, Mass., the day before Thanksgiving on Nov. 24, 2010.
© Rick Friedman/Corbis

Judge for yourself. Guns kill roughly 30,000 Americans every year [sources: Diaz, VPC]. Conversely, only 17 private American citizens in 2011 were killed in terrorist incidents around the world, about the same number of people crushed each year by falling furniture [source: Zenco]. In the 40 years between 1969 and 2009, 5,586 people lost their lives due to terrorist attacks aimed at the United States. In addition, from 2001 to 2009 there were 91 domestic terror attacks, most of which were directed against businesses, as well as private citizens and property [sources: Muhlhausen and McNeill, Diaz].

Still, terrorism receives the most attention by policy makers. The Transportation Security Administration, the federal agency charged with airport security, had an annual budget of about $8 billion and 62,000 employees in 2011. Conversely, the Bureau of Alcohol, Tobacco, Firearms and Explosives — the main government body charged with regulating guns in the United States — had a budget of $1.2 billion and 5,000 workers during that same time. In addition, there's a 1,000 to 1 spending gap between the government's efforts to combat terrorism and its attempts to curb gun violence [source: Diaz].

While it can be argued that increased spending on terrorism has stopped additional attacks, lawmakers seem to be out of step with most Americans. According to several polls taken after the Boston bombings, Americans said they feared gun violence more than terrorism. Among other events, mass shootings in a Colorado movie theater, a Sikh temple in Wisconsin and an elementary school in Newtown, Conn., have caused many Americans to rethink their stance on guns. In a poll taken two days after the Boston bombings, 56 percent of those who responded said mass shootings and other violent acts committed by Americans pose the biggest threat to their safety. Only 32 percent said that foreign terrorism committed by non-Americans was a problem, while 13 percent said that domestic terrorism was a concern [source: Honan].

In addition, 23 percent of those who responded to a Pew Research Center poll three days after Tamerlan and Dzhokhar Tsarnaev allegedly detonated the bombs on Boylston Street in Boston said they were "very" worried about terrorism, while 35 percent said they were "somewhat" worried. However, the majority, 41 percent, said they were "not too" worried or not at all worried about another terrorist attack [source: Pew Research Center]. A February 2013 Kaiser Family Foundation survey found that more Americans worry about being the victim of gun violence than they do about losing their jobs or not being able to pay the rent or mortgage [source: Kliff].