Browse the article How Mayors Work 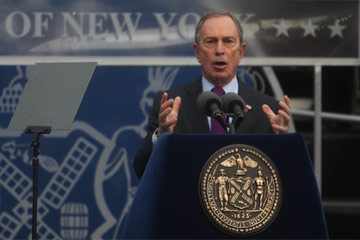 Although the national government gets a lot of face time in civics classes and the news media, local governments in America play a key role in people's day-to-day lives. Cities are an intricate part of the local government system, and since they vary greatly in size, population and politics, there's no one way run them. At the same time, a city can't succeed without some kind of management to keep it going.

In some cities, that management and authority come directly -- and indirectly -- from the mayor. Depending on the size and power structure set up by a city's charter or statutory laws, a mayor can play either an important or a minor role in a city's development and future.

In New York City, where the population is more than 8 million, the mayor has a major governing role with both national and local politics weighing on the position. In a much smaller city, though, a mayor might have more of a ceremonial role, participating in special occasions or welcoming important guests.

As the United States has grown, the position of the mayor has adapted. Many cities still have mayors, even if their duties have more to do with public relations than with the city's administration. On the next few pages, we'll take a look at some of the responsibilities mayors can have, how they are elected and who works under them. We'll also take a look at how mayors of larger cities work together to bring their urban agendas before Congress, and the President, to ensure the success of cities nationwide.

Let's go on the next page to learn more about what a mayor does.

Traditionally, mayors oversee a city's main departments, including the police, fire, education, housing and transportation departments. At the same time, their responsibilities vary depending on the local power structure. There are four main options for a city's local government structure, and some cities use a combination of several.

A common power structure is the council-weak mayor. This type of structure gives the majority of the city power to the council members, with the mayor acting as more of a ceremonial leader of the council. This traditional form of governing, which was adopted from the British style of local government, sets up the mayor as a member of the council, equal to all other members, except for a few other responsibilities. The mayor in this structure may have final authority over fiscal issues and will usually be the presiding member over all the council meetings, sign proclamations for the city and make ceremonial appearances.

The other two types of local government systems are the council-manager system and the commission system. Few cities use the commission system, but the Council-Manager system has become quite popular. In both of these systems, the mayor has power similar to the council-weak mayor, who may oversee council meetings or even appoint staff, but mainly serves in a ceremonial role [Source: Florida League of Cities].

Even if the mayor in a city doesn't have direct authority, his or her ability to use local politics can lead to more power. Some mayors may use politics to influence council members, or the city manager, to meet their agenda [Source: Romanet].And, of course, a city's citizens have power, too -- if they don't like what the mayor's doing, they can vote him or her out of office.

On the next page, we'll find out how mayors get elected.

As with the duties of mayor, the election process from city to city can vary widely. A city's charter or other city ordinances determine all the number of candidates allowed to run, as well as the primary, general and runoff elections. In order to understand how local politics in cities work, we'll take a look at some examples of elections and campaigns.

Local government elections can resemble national government politics: Campaigning is involved, there are voters, and there are usually many candidates at the beginning. But cities differ greatly on how the overall process is accomplished.

For example, in New Orleans, the 2006 election after Hurricane Katrina brought 21 candidates who competed in one large primary election. In New Orleans, candidates run against each other with no partisan affiliation [Source: Brox]. A unitary primary election is held, in which the candidate who receives the majority of the vote wins the mayoral position. If no candidate receives the majority, which happened in 2006, then a runoff election is held for the top two candidates from the unitary primary.

In most council-mayor systems, the voters directly vote for the mayor. These elections are usually referred to as at-large elections. However, some cities leave the role of electing a mayor in the hands of the council members. Although most mayors are elected directly by the voters, their term length may vary from city to city. In cities like Columbia, S.C., the mayor serves a term of four years, while in Houston, Texas, the mayor only serves a term of two years.

Mayors usually must reside in their city for at least one year before filing to run for the office. Some cities may require a longer residency before a person can become mayor. Campaigning during an election may be similar to national campaigns. Candidates raise large sums of money and spend it on advertising and voter contact, and at the same time strive for name recognition among voters, which is one of most important factors of wining an election. Although the breakdown of voting, primaries, length of residence and other factors may differ from national politics, basic campaigning is still very similar.

On the next page, we'll take a look at the organizational structure of a mayor's office.

A mayor's office can contain a large number of offices and roles or can be quite simple depending on the size of the city and the amount of responsibility that the mayor has. In larger cities, the mayor will need more assistance with managing city departments, dealing with issues of politics and policy, as well as daily duties. In this case, a long list of department heads may be established under the mayor.

In New York City, the mayor's office consists of numerous deputy mayors, each overseeing a specific area of the city. The deputy mayor departments include health and human services, economic development, education and community development, operations and government affairs. The New York City mayor also has a first deputy mayor, who acts as a counselor, press secretary, communication director and senior advisor. The first deputy mayor has the largest responsibility and oversees many administrative, operational and policy procedures, and acts on the mayor's behalf when the mayor is absent.

In smaller cities, like Casper, Wyo., which uses a council-manager system, the mayor does not have an official office with staff. Instead, the local government is run by all of the council members and a city manager. Los Angeles, on the other hand, has director positions set up under the mayor's office to deal with specific issues within the city. The city has a director of research to head up a gang reduction and youth development program. Positions like this may be temporary, but they still fall under the direct supervision of the mayor's office.

No two mayors' offices may be alike because the needs of each city, the authority structure and local politics are different. As cities expand or new problems arise, the organization of the office adapts to meet the needs of its citizens.

On the next page, we'll learn find out how mayors of large cities gather together every year to create new urban policies and present them to the national government.

The U.S. Conference of Mayors, or USCM, is the official nonpartisan organization of mayors, which means it doesn't have a political affiliation and works to stay away from divisive politics. The organization was set up after a group of mayors met with President Hoover during the Great Depression and was able to garner $300 million dollars in federal aid to assist American cities [Source: USCM]. The aid that Congress provided was the first federal relief given to the nation's cities.

Today, the primary roles of the USCM are to bridge the gap between national and local politics, ensure that federal policies meet urban needs, and to help develop urban and suburban policy that meets the needs of city citizens. The organization also provides leadership and management resources to mayors.

A total of about 1,200 cities are represented by the USM, and the Conference holds two major meetings each year [Source: USCM]. One meeting is held in Washington, D.C., each winter, and another held in June in a different city each year. Members of the organization have to be a mayor of a city with a population larger than 30,000 people. Each member gets to vote on national urban policy and can serve on the Conference committees and task forces. Committees are long-term groups that set up policy on specific topics, while task forces are set up to address problems or issues in a specific local government and then are disbanded. These task forces and committees may meet to help cities deal with issues such as homelessness, AIDS, violence or homeland security.

The U.S. Conference of Mayors brings its national urban policies to the President of the United States and Congress, and act collectively as representatives of their cities to the national government. In this way, even mayors of small towns can have an impact on the nation as a whole.