What exactly is fascism? 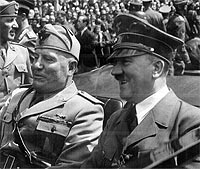 In recent weeks, the Bush administration has found a new word to characterize Islamic fundamentalists: fascists. The "War on Terror" has quietly become the "war against Islamic fascism," and the term "Islamo-fascism" has its own entry in Wikipedia. Then again, so does "Christian fascism." The word "fascism" is thrown around these days with abandon, often used to describe seemingly opposing philosophies. So what exactly is it?

The word "fascists" (or fascisti) as used in the 1930s by Benito Mussolini, the leader of the first Fascist movement and the Fascist dictator of Italy before and during World War II, most likely comes from the Italian word fascis and the Latin word fasces. Fascis means something along the lines of "bundle" or "unit." Fasces was a symbol of authority in ancient Rome, an axe surrounded by rods. These two roots offer a good glimpse into the basic tenets of fascism: unity and power.

Part of the reason why fascism seems to apply to so many different social and political viewpoints is that it is notoriously difficult to define. Mussolini's brand of Fascism is not exactly like Hitler's brand of Fascism, which is not the same as Francisco Franco's Fascism (in Spain) nor the neofascist (post-WWII) movements characterized by groups like the Skinheads. Still, there are some basic principles that can identify a Fascist movement:

Some people use "fascist" to describe any authoritarian person or government. But as you can see, authoritarianism is only part of the philosophy. Communism under Stalin was an authoritarian political philosophy, too; but Fascism is directly opposed to Communism (along with democracy, liberalism, humanism and rationalism). Aside from the above principles, a Fascist state also typically promotes a private economy that submits to government regulation; immediate (and often violent) submission of any opposing views; the ethnic dominance of its own people and the lower status of outsiders.

While politicians and Conservative pundits seem more than willing to make a connection between a socio-political philosophy like fascism and a religion-based philosophy like Islamic fundamentalism, scholars are much less quick to cross that bridge. "Religious fascism," sometimes called "clerical fascism," has been a subject of debate since the latter term was coined to describe what some viewed as the relationship between the Catholic Church and the Mussolini regime. Some people saw the Church as a supporter of Fascism in Italy. Since religion can be so closely tied to ethnicity, many scholars have found philosophical similarities between political fascism and religious fundamentalism. On the other hand, the word is not exactly morally neutral in its contemporary usage. "Fascist" has become a common slur -- a blanket term used to mean "really bad guy." Making a connection between a particular religion and fascism can be a dangerous undertaking considering fascism's current connotation and the inherent difficulty in defining any singular fascist philosophy.

For more information on fascism and related topics, check out the following links: