by John Donovan Oct 24, 2018
U.S. President Donald Trump addressed a crowd during a rally in Houston, Texas, on Oct. 22, 2018, in which he declared "I'm a nationalist." Loren Elliott/Getty Images

When President Donald Trump declared himself a nationalist on Oct. 22, 2018, the gasps that emanated from many segments of the American population were equaled only by the chants that erupted in the Texas arena in which the president spoke.

Using that term — and the ideology known as nationalism — has that kind of effect in a country so split along ideological fault lines. Nationalism is a word many associate with Nazis and racists, anti-immigration and the far right. But it is one, to others, that means something much less sinister, something noble: a pride in country above all else.

Like much of Trump's presidency, you may need to pick a side on this one.

"I think the brouhaha is partly just anti-Trumpism, pure and simple," says Jack Citrin, professor emeritus in the political science department at the University of California, Berkeley. "And part of it is a more serious engagement with what kind of a nationalism is a nationalism that is appropriate, that is liberal, that is inclusive, and that is not harsh and regressive."

First, the Merriam-Webster definition (which may or may not be the definition Trump ascribes to):

loyalty and devotion to a nation
especially: a sense of national consciousness ... exalting one nation above all others and placing primary emphasis on promotion of its culture and interests as opposed to those of other nations or supranational groups

The initial line there is one that almost no one would find problematic. But buried in that second part is a passage that has some worrying — really, really worrying — about America and its place in Trump's worldview. Especially troublesome are the bits about exalting one nation above all others and promotion of its culture and interests as opposed to those of other nations or supranational groups.

To critics, Trump's nationalism contains a narrow view of what America should be. He wants to build walls to keep out immigrants, pull back aid to foreign countries and stomp on old alliances. Still, to others, Trump's "America First" view is spot-on, even in a world inextricably tied together by common issues (trade and immigration, for two hot-button topics) and multinational agreements.

"I'm somebody that wants to help other countries of the world, but I also have to take care — we have to take care of our country," Trump told reporters from the Oval Office on Oct. 23, 2018, the day after his rally in Texas. "We can't continue to allow ourselves to be duped on military, and duped on trade."

Trump is far from the first president who has embraced "nationalism." Teddy Roosevelt trumpeted a "New Nationalism," but it was one that called for "a sweeping program of social reform designed to put human rights above property rights." Roosevelt, according to the University of Virginia's Miller Center, also wanted "to increase the influence and prestige of the United States on the world stage and make the country a global power. He also believed that the exportation of American values and ideals would have an ennobling effect on the world."

The Danger of the Word

According to the gaspers and Trump bashers, the call to nationalism doesn't mean "America First" as much as it means "Trump's Way." The specific word "nationalism," some critics say, is a call to voters who are "white nationalists" or support strict agendas that exclude all sorts of traditionally non-American groups, recent immigrants, people of color, LGBTQ people and others.

Still, it's important to note that even some of Trump's harshest critics are a little reluctant to go that far.

"I don't think nationalism is just a code word for 'white people,'" Jeffrey Toobin, a lawyer, author and CNN commentator, said on the Situation Room with Wolf Blitzer. "Look, [Trump] does so much actual racism, I think we should criticize him for his actual racism rather than what I think is an unfair criticism for this ..."

The term "nationalism" often is linked to race and ethnicity, Citrin points out, because that's how nations are built.

"Once you say, 'OK, we are nation' ... what is the basis of that nation? Who is in, who is out?" he says. "In the modern world, it becomes a real contentious issue; who belongs and what is the fundamental basis of the nation? Is it ethnic — Protestant, white, whatever — or is it civic, in which anyone can belong?

"Every time there has been a new wave of immigration, there's been this conflict of 'who are we?'. To some degree, Trump with his rhetoric, has blown up the issue: Is America really a nation that absorbs all sorts of people from different backgrounds?"

Another problem some see with Trump's brand of nationalism is that, instead of exporting American values and ennobling the rest of the world, as Roosevelt imagined, it threatens to leave the U.S. isolated. From The Washington Post earlier this year:

Foreign-policy players, however, say they see something different now: A disorderly U.S. transformation from a global leader working with partners to try to shape the world to an inwardly focused superpower that defines its international role more narrowly. The Trump administration has emphasized counterterrorism and American economic advantage in its foreign policy, while downgrading such traditional U.S. priorities as promoting human rights, democracy and international development.

Maybe at the root of the problem is that, despite Merriam-Webster's best intentions, the term "nationalism" has multiple definitions and multiple connotations. It's linked, Citrin says, to the idea that all countries have a right to self-determination; the right to be what they want to be.

"Nationalism is a kind of ideology, a body of argument on ideas of what defines a nation, who's in and who's out and what a nation means," he says.

In that definition, most Americans are nationalists. We simply disagree on what kind of a nation we are, and what we should be.

NOW THAT'S INTERESTING
According to Merriam-Webster, online lookups for the word "nationalism" spiked more than 8,000 percent on Oct. 22 and 23, 2018, after the president's comments in Houston, which he repeated the next day in an Oval Office session with reporters. 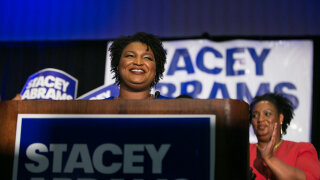 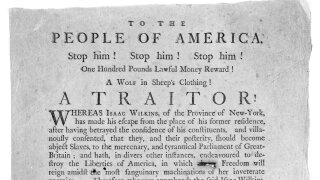 What Does 'Treason' Actually Mean? 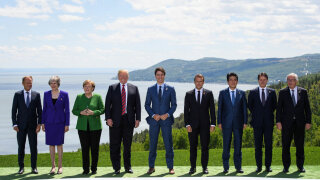