Dreadlocks in Different Types of Hair 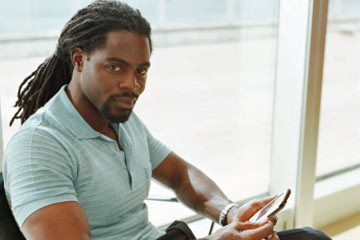 Certain types of hair are more conducive to forming in to dreadlocks, but nearly any type can be twisted and manipulated into the knotted locks.
Digital Vision/ThinkStock

Even though you can grow dreads if you just leave your hair alone to tangle and knot, there are disadvantages to the "neglect method." Simply allowing hair to form into locks by itself can take a long time, and during that formation period, there could be six to 12 months of unattractive in-between stages that might not be acceptable in social and professional situations. Plus, dreadlocks grown through neglect usually lack uniformity, and if you don't have naturally kinky or curly hair, the locks can sometimes form too loosely or unevenly, or too far down from the scalp. So, most people use specific methods to speed the natural matting process along.

Tangles, knots and matted locks will eventually form in all textures of hair if it isn't styled or combed in any way. But certain textures of hair are more conducive to forming the neat, uniform locks that we're used to seeing on reggae album covers. This makes sense if we remember that locks are formed out of spirals of tangled hair. Curly or kinky hair already grows in spirals, so it's easier to get it to form in to a tightly wound dreadlock than it is with straight hair. Think of it like a coiled telephone cord becoming so easily tangled, while a straight laptop cord typically stays tangle free.

People with African ancestry who have tight, kinky hair, or people of any race whose hair is curly and falls into ringlets, have an easier time forming dreads. For those who have straight hair, it takes more time and effort to encourage hair to grow in an unnatural spiral pattern. Forming dreads is all about accelerating the hair's natural tendency to form tangles and twists, and very curly or kinky hair does this almost automatically. In order to facilitate the locking process, you want the hair to be forced to stay as close together as possible within each individual lock.

Next, we'll talk about how to turn hair of any texture into dreadlocks.