How are cell phones changing TV? 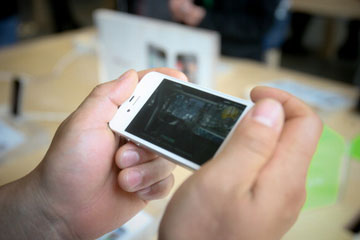 Image Gallery: Evolution of TV Those smartphone screens may be tiny, but people are still using them to watch TV shows and movies. See more pictures of TV's evolution.
ChinaFotoPress/Getty Images

With the advent of smartphones, many people are using their cell phones for more than just phone calls and texting. You can check your e-mail, catch up on Facebook, browse the Internet and even watch videos, all on the go. While that tiny telephone screen will probably never fully replace the TV, cell phones have already affected our viewing habits and changed the TV industry.

In addition to playing video, cell phones interact with televisions in exciting new ways. The iPhone's Remote app lets you use your iPhone to control your iTunes library or an Apple TV. If you've got the right setup, you can use your cell phone to watch streaming or downloaded content at full size on your TV screen without waiting through commercials or even setting your DVR. If you do want to record something, though, cell phones also now have programmable DVR apps that allow you to set your DVR to record no matter where you are. Using your cell phone as a DVR remote makes it easier to time shift programming.

Networks are also finding less conventional ways to use smartphones to engage viewers, and one growing trend is creating cell phone video games based on popular TV shows. Sure, we've seen TV-inspired video games before, but this new trend focuses on games just for cell phones and based on shows that you might not have associated with video games in the past. For example, NBC is partnering with Telltale Games to release a "Law & Order" cell phone-only video game.

Between users interacting with TVs and actually viewing video content on cell phones, the television industry has taken notice and is working to adapt to these new user behaviors. While networks don't necessarily think of themselves as competing with cell phones for viewership, the TV game is definitely changing as a result of smartphone technology.

Read on to learn more about how networks are keeping up in the age of smartphones.

One of the major ways that the smartphone is changing television is through its ability to act as a mini TV right in your pocket. With services like Netflix and Hulu available on phones, you can watch whole episodes, movies and even live TV on the go. TV-enabled phones have been around for almost a decade, but high costs and low video quality have kept many cell phone users away -- until recently. MobiTV was one of the first companies to deliver live, as well as downloadable, TV content to cell phones, and it now boasts millions of users. Thanks to less expensive data plans and better smartphone technology, it's cheaper, easier and more enjoyable to watch TV on cell phones than ever before.

While most people still prefer watching television on a full-size screen, networks have noticed an increase in viewers who are checking out content on their cell phones, and they're working to adapt.

Some companies are creating standalone series of "mobisodes," or mini TV shows, for cell phone users. Voltage, a Japanese company, creates soap operas specifically scripted and shot for cell phone viewing. For the most part, though, networks don't really see themselves as competing with cell phones for viewers. Instead, they've started tailoring content just for cell phones. Many networks see these so-called mobisodes as added value for the cell phone user: a way to keep viewers engaged in shows even when they're not watching TV. The ABC series "Lost" is a great example of a network using mobisodes to engage fans beyond just the weekly show. ABC produced 13 "Lost Missing Pieces," which provided viewers with extra clues and more backstory about the show to keep them talking about "Lost" throughout the week.

Will smartphones spell the end of television? Probably not, but since technology continues to blur the lines between TV and cell phones, we're sure to see even more innovation as the television industry works to keep up.