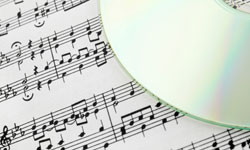 Sometimes, difficulty with music licensing can delay the release of a DVD.
iStockphoto/Thinkstock

The cult example from the previous page leads to another question the film industry is still facing, thanks to its complicated little sister -- the music industry. Due to piracy and digital duplication, the music industry was going into meltdown at precisely the time that classic shows were getting their shot at home video release in the early 2000s.

Because sale of a DVD means sale of the music contained on that DVD, films (and television shows) must contend with music and soundtrack licensing, as well as publishing rights and other artist revenues.

This can slow down a DVD's release if the money isn't already budgeted. In fact, due to these concerns, MTV's popular mid-'90s cartoon series "Daria" was only officially and fully released on DVD for the first time in 2010.

Because of the importance of music in creating a story, especially in our media-savvy age of film, these concerns are central to the budget of any DVD release. What this means is that studios and distributors are moving to more complex contracts with the projects they produce, so that video releases -- and now, online streaming -- are part of the standard agreement.