by Beth Brindle
Prev NEXT
6 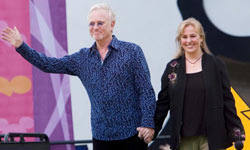 Our favorite TV couples keep us tuning in week after week, but the twists and turns of their relationships don't always bear much resemblance to real life.
Matt Stroshane/Getty Images

Widely considered the first soap opera super couple, Luke (Anthony Geary) and Laura (Genie Francis) of "General Hospital" began their relationship in 1979 with a controversial storyline, when Laura fell in love with Luke despite his having raped her in a violent drunken encounter. The characters' wedding in 1981 was the most-watched ever in soap opera history, and their divorce 20 years later did little to dissuade their fans from believing that the two were meant to be [source: West].

Throughout the course of their story, their love has weathered storms that only a soap opera could serve up with a straight face: Laura died, was brought back to life, gave birth to a son as the result of an adulterous affair with Stavros Cassadine, and much later tragically ended up in a catatonic state after being unable to cope with the fact that she had killed her stepfather. With Laura incapacitated, Luke married the conniving Tracy Quartermaine, but only to stake claim to the woman's substantial fortune [source: Associated Press].

When his true love awoke from her catatonic state (as we knew she must), they remarried, 25 years to the day after their first wedding, despite Luke's still being married to Tracy [source: Wolf]. Laura briefly slipped back into her helpless state, then revived enough to leave town, supposedly so she could receive medical treatments to prevent her catatonic episodes. Their fate remains unsettled, but our money's on at least one more go-round before this story runs its course.